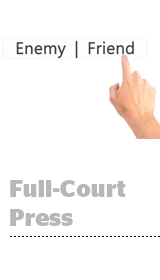 Facebook is trying to reset its relationship status with publishers from frenemy to friend.

“That is an area we can do better in,” acknowledged Brian Boland, Facebook’s VP of publisher solutions.

As for exactly how Facebook will build stronger ties with publishers, Boland only said, “We’re listening to our partners.”

Historically, publishers have had reason to be wary of Facebook, from its role in the fake news phenomenon during the election to its repeated algorithm tweaks that affect reach, referral traffic and revenue.

Although Facebook might balk at calling itself a traditional media company, it’s hard to argue with the fact that it’s where hundreds of millions of people go in order to access news – ideally not the fake variety. And publishers rely heavily on the traffic Facebook brings.

“Facebook as a platform is looking for how we can build strong, robust business relationships with publishers so that we’re not only creating great ways to distribute content, but also giving publishers a vehicle for monetization on and off Facebook,” said Boland, who transitioned into his publisher-centric role in October after more than two years as Facebook’s VP of ad tech.

Boland helms the lucrative Facebook Audience Network (FAN) meant for off-platform reach, and which is one of the only surviving elements of its ad tech stack, after Facebook killed its plans to build a demand-side platform, retired LiveRail, shut down its ad exchange and transitioned Atlas from an ad server to a measurement tool.

On Thursday, Facebook claimed that FAN now reaches more than 1 billion people each month, mostly on mobile devices. Facebook also announced new publishers monetizing through its ad network, including The Washington Post, Univision and Wenner Media in the US and the Daily Mirror in the UK.

WaPo, which has already been using Facebook Instant Articles for more than a year, is adding its mobile web experience to FAN, while Univision is planning to monetize its video inventory. Facebook added support for video to Audience Network in May.

Boland declined to share how many publishers are hooked into Audience Network other than to say the criteria for inclusion centers on quality over quantity. “We have relatively fewer publishers in the network, but they’re high-quality publishers,” he said. “They’re completely indexed on the outcomes they create and we’re always watching to see their performance on the network. If publishers don’t create value for people or advertisers, then we no longer have them on the network.”

Facebook may be in a deucedly awkward position as the referee on what is considered quality. Even though fake news sites are chock full of nonsense, they no doubt generate a lot of engagement. And then there are the satirists, the Onions and Farks of the world, a category of content that clearly provides audience value but also muddy the definitional waters.

In mid-November, Facebook banned fake news sites from using Audience Network to sell ad inventory, although that doesn’t stop users from posting links to fake news sites in their news feed – it just prohibits the sites themselves from monetizing through FAN.

To fight fake news in the feed, Facebook launched a program in December to work with third-party fact-checking organizations, including Poynter, ABC News and Snopes, to root out hoax stories on Facebook. Disputed stories will be labeled as such and appear lower in the feed. In the weeks since, there’s been a right-wing backlash against the purportedly left-leaning outlets chosen as Facebook’s fact-check partners.

As part of the Journalism Project, Facebook rolled out a very Snapchat-like version of Instant Articles that lets publishers package multiple articles within the same post, a feature publishers have been asking for.

“I would characterize it this way,” Boland said. “We’re just not what you would consider a traditional media company, but we want to be a publisher’s best and most important partner and we want to generally cover the needs of their business.”

And that means listening and moving fast (and invariably breaking a few things).

“We’re not creating content, but we do recognize our responsibility in this ecosystem to figure out how to be a new kind of technology company that helps people connect with media in new ways,” Boland said. “Dialogue is the first step – listening and learning – and I think the products we’ve released recently on the audience development and monetization side reflect that.”

But Facebook has a lot of balls to keep in the air, observed Eytan Elbaz, who co-founded the company that would eventually become Google AdSense.

“Being an arbiter over what is real and what is fake, deciding how traffic gets released and being a business partner, figuring out a revenue-sharing model,” Elbaz said. ”These are complicated issues that are all very intertwined.”