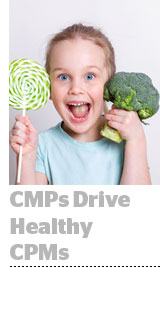 Publishers who use a consent management platform (CMP) saw CPMs rise 9% and fill rates go up 5% post-GDPR, according to analysis of publishers using Mediavine, which manages ads for thousands of sites.

Meanwhile, publishers who didn’t use a CMP for their European Union traffic saw CPMs dive precipitously. With no targeted ads, CPMs fell 43% in the two months following GDPR. Fill rates dropped by 34%.

The CPM differences between publishers who used CMPs and those who continued with the status quo are striking. CPMs were 52% higher among sites that implemented a CMP compared to publishers that left their current setup in place. Fill rates were 39% higher.

The difference in revenue means even publishers with a small amount of EU traffic should find a way to gain consent to show targeted ads to users.

“Adopt a CMP. Especially coming into Q4, the difference in CPMs could be even more dramatic,” said Phil Bohn, SVP of sales and revenue at Mediavine.

The EU accounts for 7% of Mediavine’s traffic and 12% of revenue, an amount critical to its bottom line, Bohn said. When GDPR went into effect, Mediavine built a CMP to gather opt-ins for targeted ads, which met both the IAB’s and Google’s standards for consent.

But it didn’t force publishers to adopt the tool, since a CMP can be invasive. Thirty-one percent of Mediavine’s publishers opted against using a CMP, which gave Mediavine the opportunity to run the analysis of how CPMs and fill rates differed.

Mediavine compared CPMs and fill rates in March and April, before GDPR went into effect, with CPMs and fill rates during June and July, after GDPR was implemented. It ignored May, since it rolled out its CMP in phases during that month. About 20 sites opted to use their own CMP, so Mediavine excluded them from the test results for consistency.

One reason why Mediavine saw such striking differences in CPMs was because it achieved an extremely high rate of consent from readers. Ninety-eight percent of people seeing the CMP message opted in, allowing advertisers to serve targeted ads.

Why such a high consent rate? Mediavine works primarily with bloggers, so the CMP’s message from a blogger to their readers explaining why they needed ads to keep the lights on may have resonated particularly strongly with those opting in, Bohn said.

Based on the results, Mediavine is advising all its publishers to add a CMP. Even if the EU accounts for a small portion of traffic, the difference in CPMs and fill rates is significant enough to justify adding a consent pop-up for that portion of traffic.

“The dust has settled; we shouldn’t be too scared of GDPR,” Bohn said, adding that Mediavine’s sites have seen virtually no user complaints. “If you do the right things and you’re in compliance of the law, your revenue should be OK.”