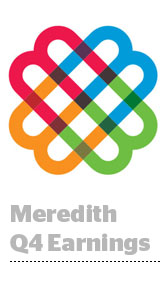 Meredith will offload its 60% equity interest in ad platform business Viant, the company confirmed on its fiscal fourth-quarter earnings call on Friday. It expects the sale to be finalized early in its coming fiscal year.

Time Inc. bought Viant in 2016 for $87 million, and the purchase gave an inorganic boost to the publisher’s digital revenue.

In addition to Viant, the company plans to sell Time, Sports Illustrated, Fortune and Money within a year, and the funds from the sale will help Meredith pay down $1 billion in debt.

Overall, Meredith reported $375.5 million in advertising revenue in its Q4 period. Circulation revenue contributed another $190 million in revenue, and “other” revenue such as ecommerce and brand licensing delivered $222 million.

Meredith will continue to diversify revenue in the coming year.

It expects that 45% of revenue for its national media group will come from “high-margin, non-advertising-related activities,” executive chairman Steve Lacy said on the company’s earnings call. Those revenue streams include subscriptions, brand licensing and ecommerce.

In the past fiscal year, for example, the company’s websites drove 100 million referrals to online retailers. And Meredith holds a database of 160 million individuals, which it plans to use to cross-sell subscriptions and bolster its non-advertising business.

Although Meredith is focusing on diversifying revenue, combining with Time Inc. strengthens its offering to advertisers through greater scale, including 9 billion video views annually.

According to CEO Tom Harty, Time Inc. underperformed on its advertising business, with a less efficient sales structure and lower margins than Meredith achieved. To correct this, Meredith installed a publisher for each Time Inc. brand and implemented a central, corporate sales team to make the buying process more efficient for its largest clients.

As of July 1st, Meredith unified its digital ad platforms. Buyers have been able to activate programmatically across the Meredith and Time Inc. portfolio since then, though it’s still early days.

Plus, Meredith is finalizing agreements with agency holding companies to “leverage the increased scale of the portfolio,” Harty said, adding, “It doesn’t happen overnight.”

Next year, Meredith expects one-third of its revenue to be driven by digital, including digital ads but also ecommerce and other paid products.

Meredith’s local media group expects an influx of political ad dollars in the next two quarters, with one-third of expected political revenue next quarter and the remaining two-thirds the second quarter.

Nine governors’ races are up for grabs in markets where the local media group has a presence – the most that Meredith remembers seeing – along with key Congress and Senate rates.

In the past 12 months, the local media group reported $16 million in revenues, the most ever for a non-political year, in part due to early spending on races. Meredith expects that political revenue this year will exceed the record $63 million it posted after the 2016 election cycle.