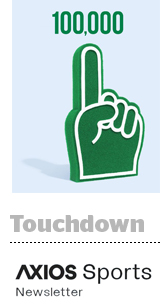 But this is not just growth for growth’s sake, said Ernesto Arrocha, associate director of growth and engagement at Axios, which publishes just under 20 daily and weekly newsletters.

Its sports newsletter maintains a 42% open rate, around double the industry benchmark for email opens.

“Growth can often mean raw subscriber numbers, but we’re thinking about what an Axios consumer looks like,” Arrocha said. “For newsletters, that means highly engaged subscribers.”

To find these people at scale, Axios eschews standard buying metrics, such as cost per acquisition and cost per click, for a custom metric called cost per email acquired (CPEA).

“Our approach to growth is less about the tactics in and of themselves and more about the framework we use when we make media or marketing investments,” Arrocha said.

Every user acquisition channel employed by Axios to attract subscribers, whether it be paid social or a partnership with a nanoinfluencer, must back into a cost-effective CPEA.

Although buying on a CPEA basis can get a little tricky when most of the media buying world runs on CPA, Arrocha has a formula to translate cost per acquisition into CPEA. If he’s buying Facebook ads, for example, he’ll look at historical data for a specified time period to see how many active subscribers were generated against ad spend and compare it with the target CPEA.

Once someone subscribes, Arrocho and his team switch into retention marketing mode. Every new Axios Sports subscriber receives a welcome email from the newsletter’s author, Kendall Baker, which Axios has found triggers a 6% increase in the overall newsletter open rate.

And, starting soon, Axios will include a unique URL referral code at the bottom of every Axios Sports newsletter with the idea that one engaged subscriber is likely to beget another.

“From a cost perspective, these kinds of programs can be extremely efficient, because the audience you get from referrals tends to be really engaged right off the bat,” Arrocho said.

There are some subscribers, however, that sign up but never end up opening or engaging with the newsletter. Axios regularly scrubs its subscriber lists to make sure it’s not sending emails to people who don’t want them.

After a couple of check-in messages to request feedback and suggest other content to read, Axios proactively churns dormant subscribers with a note telling them they’ve been unsubscribed with the option to resubscribe anytime.

“It’s really important to us to maintain a healthy audience within the context of our newsletter,” Arrocho said. “There is no additional value in having people there that aren’t engaging with our content.”

Axios Sports was born out of Sports Internet, a newsletter launched in 2017 by Baker, an ex-ESPN video producer and Bleacher Report writer. Sports Internet grew organically from zero to 11,000 subscribers over the course of around a year, with no paid marketing. Axios acquired Sports Internet in January of this year.