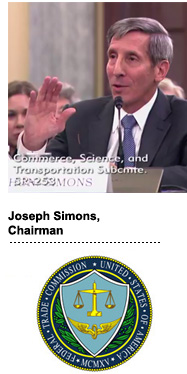 There’s no point passing a comprehensive federal privacy legislation if the main enforcement agency doesn’t have the means to hold feet to the fire.

On Tuesday, all five commissioners of the Federal Trade Commission appeared before the Senate Subcommittee on Consumer Protection in Washington, D.C., to make an appeal for more resources.

“Section 5 is an imperfect tool,” said FTC Chairman Joseph Simons, referring to the statute under the Federal Trade Commission Act that prohibits unfair or deceptive practices.

Specifically, the FTC is looking for targeted rulemaking authority, jurisdiction over nonprofits and common carriers and for the ability to seek civil penalties to discourage unlawful conduct and create the proper deterrents for bad actors.

“There is more and more data collection and our largest firms in the economy are relying heavily on how to monetize that data,” said Democratic Commissioner Rohit Chopra. “It’s a bigger and bigger part of US GDP, and if that is going to grow, the FTC’s resources have to grow commensurately. When cities grow, they hire more cops, and we have to do the same.”

As it stands, the FTC is the most understaffed it’s been since the Reagan administration. Today, there are only around 1,000 employees tasked with policing consumer protection and privacy violations across the entire $19 trillion US economy.

The breakneck pace of an increasingly data-driven economy and the question of how to deal with big tech’s anti-competitive tendencies are also major enforcement challenges.

Sen. Richard Blumenthal (D-CT) rather sharply pointed out that if the FTC had “adequately enforced” its 2012 consent decree against Facebook over the latter’s improper third-party data sharing, then the Cambridge Analytica debacle would probably never have happened.

The FTC is currently investigating if Facebook broke its consent decree and whether the company will face penalties. Simons declined to share any information on how the case is proceeding or when it will be completed.

Regardless of the outcome, though, Congress is “fed up” with big tech, Blumenthal said.

The FTC is more than halfway through a series of public hearings covering consumer protection and competition-related issues as it works to sort out its enforcement agenda for the coming years. The outcome of these hearings will likely have serious ramifications for Google, Facebook, Amazon and their big tech cohorts.

Tuesday was also a long day for Google’s peer Facebook, whose VP of public policy was questioned in the United Kingdom during an international parliamentary committee attended by lawmakers running out of patience with the large tech platforms.

“We’ve never seen anything quite like Facebook,” said Canadian representative Charlie Angus. “While we were playing with our phones and apps our democratic institutions and forms of civil conversation seem to have been upended by frat boy billionaires from California.”