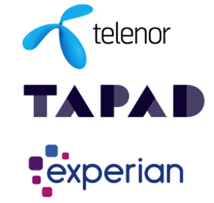 Guess telcos really aren’t that into ad tech after all.

On Thursday, Norwegian telco Telenor sold cross-device company Tapad to Experian in a transaction advised by LUMA Partners. Experian is acquiring 100% of Tapad for a cash consideration of roughly $280 million.

Not too shabby for an ad tech company getting sold in 2020.

Tapad’s revenue is forecast to be $55 million this year. Its assets will be included within Experian’s North America data segment.

It was less than five years ago that Telenor bought Tapad for $360 million in February 2016 amid much fanfare about telcos being able to take better advantage of their first-party data to inform real-time advertising.

Early on, however, in Q4 of 2016, Telenor alerted investors that it was writing down its Tapad acquisition to the tune of $121 million.

Although Telenor made some use of its Tapad assets over the years, including using Tapad’s tech to drive sales and customer acquisition for Telenor’s own products, Telenor primarily operated as a stand-alone data business.

So, what does Experian get out of the deal?

Tapad’s identity resolution capabilities will, according to Experian, help enhance its digital offerings for advertisers, agencies and publishers, with a particular focus on advanced TV.

The acquisition positions Experian “to take advantage of expansion in the market for digital-data advertising,” the company said in a release, and “enables Experian to help marketers create a more relevant experience for consumers while continuing to protect consumer privacy.”

Cross-device tracking is considered by privacy advocates to be one of the darkest dark arts of ad tech.

For example, in late 2018, Tapad and a bunch of other companies – including Experian, actually – were named in a series of privacy complaints filed in the United Kingdom over alleged GDPR violations.

Tapad’s data ingestion was called out specifically as a case study for why it’s almost impossible for a regular person to fully understand how their data is sourced, who is sourcing it and what happens to it downstream.

But Experian is forecasting a rosy future in which Tapad’s assets will help create a foundation upon which Experian can develop new products for identity verification and identity graphs, while enhancing its fraud and identity management services, including the Experian One identity platform.

Terry Kawaja, CEO and founder of LUMA, considers the deal a win/win/win, because it helps Telenor rationalize non-core assets, it allows Tapad to find a more appropriate corporate home and it gives Experian strategic capabilities in the rapidly evolving identity sector.

It’s also further evidence of a return to strategic deal-making activity following a COVID-related slowdown in Q2 and Q3, as predicted by LUMA.

And on the privacy front, “that issue was heavily due diligenced,” Kawaja said. “The Tapad folks have an enviable record for how they’ve dealt with it, and Experian is eyes wide open in terms of what’s being done relative to the laws of the land.”

Kawaja also pointed to the fact that in the intervening years between Telenor writing down Tapad and now, Telenor actually had to “write Tapad back up,” because the company became more valuable in the interim.

But although the acquisition makes sense given Experian’s rationale of looking to link consumers across its owned-and-operated properties, “it’s still a curious time in the industry for such a move,” said Mandar Shinde, an ex-AOL and Microsoft executive.

“Especially after CPRA, Tapad is a significant risk for buyers and advertisers who link users without their permission,” Shinde said. “I suspect we’re going to see a fire sale for a lot of non-permissioned data-linking companies soon.”

Yet there are others who see a role for probabilistic players in the new world of identity.

This acquisition shows the value premium data providers with unique attributes can bring to cross-platform media through probabilistic solutions,” said Alistair Goodman, GM of Ericsson Emodo. “The concept of 100% deterministic targeting, measurement and ID matching will not coexist with a consumer privacy-focused future – at least, not at scale.”