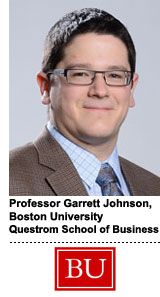 Aka, when publishers reduce the number of ad tech, audience measurement and other web technology vendors they work with, Google and Facebook win, according to new academic research examining the unintended consequences of the General Data Protection Regulation (GDPR).

The skittishness with which publishers reacted in the wake of GDPR could be a harbinger of what will happen under future enforcement.

The paper, written by Boston University marketing professor Garrett Johnson and Scott K. Shriver of the University of Colorado Boulder, demonstrates how privacy regulation can decrease competition among vendors that provide data-driven services to websites.

While it’s long been the accepted narrative that Europe’s sweeping privacy law benefited Google and Facebook, because data-sharing restrictions logically concentrate a lot of power into the two mega platforms, there hasn’t been any solid data to prove it.

But there’s also more nuance to that reality.

Both Facebook’s and Google’s relative market share increased following GDPR, meaning that as publishers stopped working with smaller vendors, they flocked to Facebook and Google.

As publishers reduced their vendor partners – they used 15% fewer vendors one week after GDPR’s enforcement date – they disproportionately kicked out the smaller vendors and kept working with the big guys, of which Google and Facebook are two of the biggest.

Google Ad Manager won in 98.9% of these head-to-head battles, Johnson said, while Google Analytics had a 93.5% win rate over other audience measurement vendors. Facebook won out 87.2% of the time against other social media platforms and social sharing tools.

In other words, both Facebook’s and Google’s absolute market share, which refers to room for growth in a marketplace, declined.

“I wouldn’t say Google and Facebook are wearing party hats,” Johnson said. “On a relative basis, their position is strong,” but on an absolute basis they’re losing out like the rest of the ecosystem. Johnson and Shriver arrived at their conclusions after examining web tech vendor usage across more than 27,000 websites drawn from the top 2,000 sites in each of the 28 EU countries and the most popular sites across the United States, Canada and globally.

Interestingly, Johnson and Shriver found that over the course of 2018, publishers gradually reestablished the vendor relationships they had terminated, returning to pre-GDPR levels by the end of the year.

But despite this market correction, the initial drop proves how fraught the online tracking landscape is right now, and could provide a window into what will happen when European regulators really get cracking on enforcement, which they’ve promised to do.

Life may have returned to relative normal post GDPR, but publishers are spooked and their reactions can have a huge impact on market concentration.

“Regulators have signaled loud and clear that the party is over and things have to change – just read the ICO’s report,” Johnson said. “The data in 2018 tells that story very clearly.”

The message here, however, is not that privacy laws shouldn’t exist because they hurt competition, Johnson said, and shouldn’t be misconstrued as such.

“We’re simply saying that if you propose privacy regulations, you also need to think about the potential consequences and how to mitigate them – you need a full accounting,” he said. “We’re just trying to enrich the discussion with empirical data.”

Johnson is well aware that this research will probably ruffle a few feathers. He and Shriver were two of the researchers behind a recent study that sparked a contentious debate after stating that third-party tracking cookies underpin publisher ad revenue.