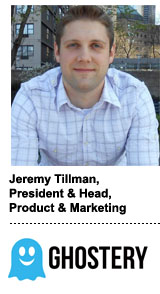 As an anti-tracking company and the creator of a privacy extension for the web, you’d think Ghostery would be all about the elimination of third-party cookies.

But Jeremy Tillman, president of Ghostery, is wary of Google’s motivation for phasing out third-party tracking in Chrome.

“You have to think about the second-order effects of these types of changes,” Tillman said. “What is better for privacy and the user experience from one perspective, can be not so good for competition and the free market from another.”

Ghostery’s research has found that tracking scripts from Google are present on just more than 80% of all page loads. Facebook follows at 27.1%.

“It’s been a big advantage for them for a long time,” Tillman said. “And now, as companies need to depend more on first-party relationships, here’s Google and others positioning themselves as the solution to do that.”

AdExchanger caught up with Tillman for a few hot takes on R&D in an age of uncertainty, potential antitrust action and why it’s getting harder to build extensions for the Chrome browser.

On differing definitions of privacy: “Everybody is the hero of their own story and that informs how they approach privacy.

“Take Google vs. Facebook. Each has decided to define privacy on its own terms. At Facebook, Mark Zuckerberg defines privacy as the need for end-to-end encrypted messaging. Google defines it as protecting against any data collection that it’s not doing itself. Both can be seen as a way to consolidate their own power.”

On existing “at the pleasure” of Google: The fact is, they define the APIs that power our primary product, and we have no choice but to try to adapt and survive. For example, there’s a fairly big change coming to the Web Extension API in Chrome that will impact a lot of extensions and make it much harder to detect and track third-party technologies.

On how it’s getting more difficult to build privacy tools for Chrome: “Google is making it harder to detect and block on the page by implementing a new rule structure that interferes with the ability to provide granular insight into how web pages function.

“Ghostery works by examining the web requests that go in and out of a page to determine whether it’s third-party or not based on our own database. We can either modify the request and allow an ad to go through while anonymizing the data or we can block the ad completely. Google is removing that capability and forcing us to use a declarative net request approach that operates like a black box. We’re now required to put our blocking rules into a list, which means we tell Chrome what to block or not – but you’re not sure if it’s actually been blocked. Chrome is doing this under the guise of security.”

On building technology in uncertain times: “We invest a lot of time and effort to adapt our technology that could be used to drive innovation. But we’re forced to do R&D just to maintain the status quo or at least something close to it.

“At the same time, there is effectively a Sword of Damocles above our head in the form of something called the single-purpose requirement, which is a vaguely defined rule within the Chrome terms and conditions that says an extension can only have one purpose. You don’t want ad blocking, say, bundled into a single extension with grammar checking or something like that.

“But how do you define ‘one purpose?’ Chrome doesn’t tell us. We detect and block third-party trackers – is that one purpose or two? All web extensions live in fear of Google telling us at some point that we’re in violation of the single-purpose requirement.”

On the impact of the recent House antitrust report: “Whether or not the report results in meaningful steps taken against these big tech companies to try to manage their power really depends on what happens with the election.

“A Democratic-controlled House, Senate and presidency could action the report recommendations around larger antitrust and privacy regulations at state and federal levels and drive impact. Should the tide turn the other way, we could see how the report could go largely ignored and never be acted upon. [But] it’s undeniable we’re seeing the broader landscape shifting toward greater regulation against antitrust and with a growing focus on privacy.”

On why the big tech platforms can be more powerful than the regulators: “These are companies that are simultaneously able to make wholesale changes to the environment and engage in massive lobbying to defend the status quo while also adapting their own tech suites at the same time. You better believe that Google, for example, is evolving its technologies in concert with the changes it’s making in Chrome so that it won’t be an issue for them.”