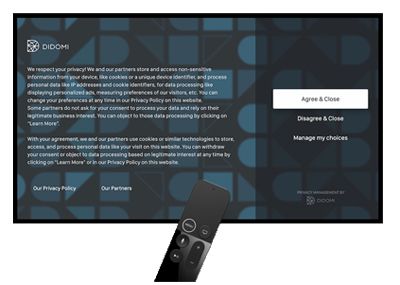 On Tuesday, French consent management platform Didomi released an expanded version of its offering for the web and mobile apps that supports consent compliance for connected TV, OTT and smart TVs.

Viewers give or decline to share their consent on an app-by-app basis. The default option is to “Agree and Continue,” although publishers that integrate the CMP have the ability to change the default setting to encourage people to explore “More Options,” where they can access a detailed list of vendors, see defined purposes for collecting data and scan a QR code in order to view a company’s privacy policy on a secondary device, like a smartphone.

But gathering consent on a connected TV requires striking a tricky balance between complying with the law, meeting consumer expectations, avoiding consent fatigue and not messing with the user experience.

Most consumers don’t read consent screens, privacy policies or T&Cs while they’re leaning back in their living room with a bowl of popcorn in their lap. People just want to watch TV. But if they click without reading, does that count as informed consent? And what data does the average consumer expect a smart TV to collect and share?

Didomi doesn’t have all the answers, said Romain Gauthier, the company’s CEO and co-founder.

But it’s important to at least begin introducing the concept of consent collection for connected TV so that consumers are aware of the collection of their data. By the same token, advertisers, publishers and ad tech vendors need a systematic, standardized way to collect and share consent signals.

“It’s crucial that people be given an opportunity to say no and that it works when they do – that is the main role of a CMP,” Gauthier said. “Many users might not care right now, but they might care in the future, and so we need to start educating them now.”

The situation isn’t great. Today, most CTV inventory doesn’t come with valid consent. “It varies from country to country, but it’s only a few percentage points,” Gauthier said.

One of the issues is that consent and privacy aren’t top of mind for marketers who are busy navigating the growth of streaming amid the decline of linear, said Eric Schmitt, a research director and analyst at Gartner.

“Due to the fragmentation of the CTV and OTT media landscape, TV and video planners are most focused on questions of overall ad investment strategy and their buying approach,” Schmitt said. “It seems likely that we will see a privacy reckoning in streaming TV as CTV and OTT scale and intersect with privacy regulations.”

Not to mention restrictions being put in place by platforms and device manufacturers.

For example, there’s no reason to believe Apple won’t carry over the AppTrackingTransparency framework it’s rolling out across the iOS ecosystem into the TV operating system world, Schmitt said.

“Given this, one would expect that the consent and privacy approaches taken by players like Amazon, Comcast, LG, Roku, Samsung and Vizio/Inscape will increasingly become a topic of interest to advertisers,” he said.

Vizio already got burned on this score a few years ago when, in 2017, the TV manufacturer agreed to pay $2.2 million to the Federal Trade Commission and the New Jersey attorney general’s office in order to settle charges that it collected viewing data on 11 million smart TVs without user consent.

“Everyone is so bullish about the potential of CTV and how it will save ad tech,” Gauthier said. “But you need users to be correctly informed – history has shown that if users don’t understand or aren’t aware of what you’re doing, that’s a great way to have a lot of backlash against your advertising practices.”