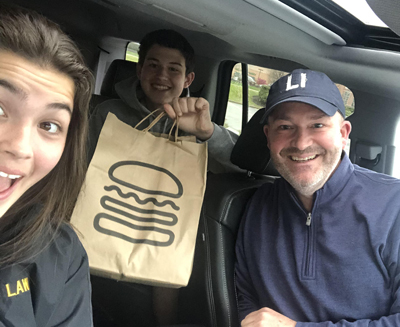 Mike Law, president of Dentsu Aegis Network’s Amplifi, is thinking hard about what entertainment advertising this year might look like, with production and live events on hold.

“You want to have some understanding of what that supply actually is,” he says. “We don’t want to commoditize this to just being about, we’re buying something and we’ll figure it out later.”

One thing is for sure: Mike won’t be negotiating for his collective client base this spring like he usually does. “I think we’ll see lots of very client-specific transactions and negotiations happening throughout the rest of the year,” he predicts.

These days, Mike replaces casual hallway conversations with video check-ins on chat apps. On Fridays, his leadership team eats lunch together over video. “I think it keeps people’s spirits up to be reached out to,” he says.

On the weekends, Mike hangs out with his teenage kids at his home in Sayville in Long Island, New York, where he’s sheltering in place near the water. Last weekend, they made spaghetti together (it didn’t quite look like spaghetti, but it still tasted good). He’s also making good use of his Peloton and going to the golf course – which is partially open – when he can.