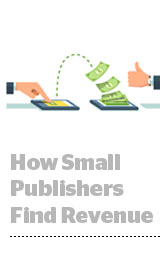 Many want direct relationships with consumers. They want to stake out their own URL to build on a social media presence. On their own site, they prefer to charge for subscriptions, accept donations or sell products in order to support their content production.

For some of these media creators, ads a secondary concern. Some even go ad-free.

“I’ve worked with creators at YouTube and Vine,” said Verst CEO AJ Frank. “While digital advertising provides some revenue for creators on those platforms, it was not sufficient. And it tended not to be the biggest revenue stream.”

Frank, a veteran of YouTube and Twitter, was brought in as CEO last fall after Verst’s original concept (dubbed DWNLD) – which offered mobile app tools for small publishers – failed to gain traction. Greylock Partners, which had invested a $12 million Series A in the company in September 2015, appointed Frank to take over.

In its new incarnation, Verst focuses on mobile web publishing, not apps, to align with where readers are spending more time.

In terms of customers, Verst plans to occupy a space between Medium and WordPress. If Medium skews hobbyist and WordPress can be too complex for many creators, Verst wants to be an easy-to-implement, inexpensive solution for small creators on the rise.

And the company is launching Wednesday a version that allows publishers to create paywalls and charge subscriptions. Publishers pay a small monthly fee.

The company has enrolled a few thousand subscribers since launch, Frank said. Revenue from subscribers as well as the Series A funding is keeping the company going as it seeks additional customer growth.

Influencers like Reid Hoffman and Ian Capstick use the platform, along with Stigma, an online mental-health community.

One of its publisher customers is Shout, which got its start when founder Flavius Mihaies started reporting from Syria via Facebook in 2015. Shout plans to charge for subscriptions.

“You can only go so far on Facebook as a small publisher,” Mihaies said, while praising its quick speeds in a country with slow, unreliable internet. The publisher, which has racked up more than 25,000 Facebook followers, also knew that only a small portion of its followers would see a given post.

Shout plans to charge $5 per month for subscribers. It doesn’t plan to turn on advertising because of the high cost to manage ads along with the low CPMs. “It’s not a fit for us,” Mihaies said. “[Advertisers] can get a better CPM and targeting on Facebook.”

Shout, which publishes in Arabic and English with a small, engaged audience, aims to be the next Vice, with less of its “cocky white man” ethos, Mihaies said. With subscriber feedback, it plans to focus on the content its subscribers want, whether it ends up being podcasts, video or a specific topic.

“Creators need multiple revenue streams to build content around,” Verst’s Frank said. “I’ve witnessed that trend in video, but not publishing. Paid subscriptions are working for The New York Times and The Information, but we haven’t seen that trickle down to the individual creator and smaller influencers in publishing.

“For us, this seemed like an opportunity to attack.”