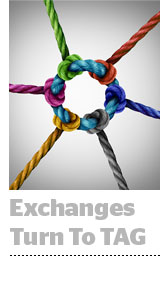 The CEOs of OpenX, PubMatic, Rubicon Project, Sovrn, SpotX and Telaria collectively signed a letter to advertisers and publishers outlining principles of transparency, efficiency and fair-market practices. They want to clearly state what’s acceptable and what’s not to restore trust in the supply chain among buyers, agencies and publishers.

“Programmatic has amazing long-term potential, but it has had some glitches and questions about trust and transparency,” said Tim Cadogan, CEO of OpenX. “Us in the middle have felt that frustration, from buyers in particular.”

The exchanges have proposed forbidding tactics like sending out multiple bids for the same impression, bid caching or container preferencing, and they hope TAG will review and codify these principles into best practices by the end of the year, said TAG CEO and President Mike Zaneis.

Then, exchanges can undergo a third-party audit to verify they’re following these best practices.

“[This process] follows a playbook we have had in the past,” said Sovrn CEO Walter Knapp, who has previously co-chaired anti-piracy committees at the IAB. “Trust and consistency opens the market for everyone. The challenge is collective action.”

The principles outlined in the letter – similar to but not exactly like the principles document MediaMath asked its exchanges to sign two weeks ago – include ones some exchanges already follow and with which others say they plan to comply.

The exchanges also agreed not to charge hidden fees or give rebates and committed to fully audit the bid requests, winning bids, impressions and clicks in the supply chain.

They agreed to notify buyers in advance if they change auction dynamics, to clearly mark first-price and second-price auctions and not to bid cache without notice or use a header bidding wrapper to create bias.

The exchanges pledged to send just one bid request per ad, scan all ads for malware and invalid traffic and review all domains for brand safety, ad count, refresh rates and audience quality.

These principles may change as TAG takes on the process and decides what to include in its best practices guidelines. Buyers like Hearts & Science who have called for third-party audits to ensure exchanges run clean auctions will be able to buy through exchanges certified by TAG, just as buyers seek TAG-certified partners for malware, fraud and anti-piracy.

“TAG has always had the mission to increase trust and transparency in the marketplace, so this is a perfect fit for our existing certification programs,” Zaneis said.

Cadogan said other exchanges beyond the six original signers have seen the document and support it.

“Programmatic is becoming a more important piece of the puzzle for buyers, who want to understand exactly how the value chain works,” OpenX’s Cadogan said. “We hope this is a big move that provides more clarity and sets up standardized, specific rules of the game.”