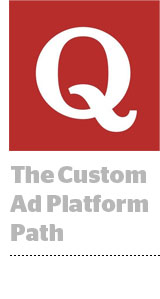 The question-and-answer site Quora considers itself a unique hybrid of search and social. Since neither of those platforms open themselves up to programmatic demand, Quora decided it wouldn’t go that route either.

Quora’s ads platform officially went live in May with 300 advertisers on board, who could only purchase ads through Quora’s Facebook-like self-serve ad platform. The ads themselves are text-only and look like Google Search ads.

The ad platform’s blending of elements of search and social advertising is intentional.

Because people go on Quora to research products or figure out how to solve business problems, the platform has taken off with B2B advertisers. Quora’s current customers include Hubspot, MuleSoft, Shopify, Datadog, Heap and Gusto.

“We think of our users as being slightly up the funnel from Google [search],” said Sarah Smith, VP of ad sales and operations at Quora, who joined five years ago from Facebook. “They haven’t quite made their decision, but we are not as top-of-funnel as social platforms.”

And that’s why B2B advertiesrs were quick to find Quora, Smith said. “It can be very hard for them to connect to their audience. There are only so many CTOs in the world, and many of them are on Quora.”

One of Quora’s early B2B advertisers was Instapage, which optimizes landing pages for companies large and small. The company already knew about Quora because the site drove the highest number of organic conversions to paid subscriptions, said Instapage paid marketing manager Patrick Holmes.

When it comes to user intent, likelihood to convert and pricing, Quora’s performance tends to fall between search and social. “Quora performs one-quarter as well as search, in terms of the rates that people upgrade, but two times as good as social,” Holmes said. “But search costs a lot more.”

Before adding Quora, Instapage’s online advertising focused on search marketing and Facebook. LinkedIn, though a logical place for a B2B advertiser to operate, was too expensive.

Holmes however feels Quora hasn’t performed as well outside the US, so it cut spend there. About half of the platform’s 200 million monthly unique users live outside the US, according to Quora.

But improvements are coming – Quora is adding to its ad platform capabilities. Earlier this year, it allowed advertisers to target audiences, not just topics. And companies can add a Quora conversion pixel to their page in order to retarget users who visit their site, Smith said.

“Quora is focused on advertiser ROI. We aren’t trying to do fancy, custom things,” Smith said. “We are trying to do what’s intuitive and connects with people at this unique place in the funnel where they are actively researching and considering a purchase.”

Building a feature set competitive with other self-serve platforms will take time, though Smith said marketers have been impressed with what Quora has been able to build so far. And Quora’s never been in a rush.

It went its first seven years without ads, as it nurtured its audience and figured out how best to monetize its users. Quora plans to continue building its platform at its own pace – which is slower than Facebook.

“It’s easy to forget that Facebook did not do everything marketers wanted,” Smith said. “Now they have thousands of engineers working on the product.”