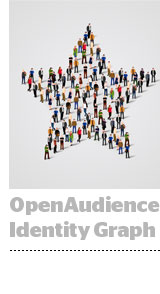 OpenX is testing a platform called OpenAudience that lets advertisers buy using its identity graph, which includes access to unique data from its publishers.

It plans to makes its identity graph-enabled buying generally available in Q3.

This announcement is unusual in that exchanges like OpenX usually do not offer identity graphs that connect audience data across different sites.

Exceptions include Facebook and Google, though their publisher data sets are generally only available within their respective walled gardens. OpenX’s OpenAudience, however, lets advertisers use publisher data in the open internet.

And aggregated publisher data is particularly valuable because it’s different from other data sets. It lets advertisers buy based off of audience behaviors using cross-site tracking.

OpenX is betting that if it provides easy access to scaled identity data, it can differentiate itself from other exchanges, which are largely becoming commoditized. And it can win back some of the marketing dollars going to Facebook over the open web.

OpenAudience is currently in private testing with a handful of buyers, who can target audiences across multiple publishers via private marketplaces sold by OpenX. Pricing will be the same for this offering as OpenX’s other deals.

“We need to create a true people-based system for the open web, so the open web can generate its fair share of ad spend,” said OpenX CEO Tim Cadogan, citing eMarketer figures that walled gardens receive two-thirds of digital ad spend while accounting for just 36% of time spent online.

Historically, exchanges don’t offer repositories of audience data – that’s been the realm of DSPs. During a programmatic auction, exchanges put out a bid request with an ID. On the buy side, the DSP uses its own data to decide if it’s worth showing an ad to that person.

“A DSP is hunting and pecking around with data. Our approach is to profile the open web,” said Chief Product Officer Todd Parsons. He joined OpenX from SocialCode where he learned about social media buying.

OpenAudience moves the identity graph into the exchange.

OpenX determined it reached 240 million unique people every month, and used Tapad, LiveRamp and other identity companies to enrich those IDs. It also overlaid third-party data onto its identity graph.

OpenX also got publishers’ permission to use browsing behavior data to assemble consumer profiles. Then it started collecting information about how people respond to different types of ads.

While a few test advertisers – in finance, beauty and entertainment verticals – are buying this inventory using deal IDs , OpenX wants to eventually enable API access. If that happens, buyers will be able to sync their own identities using the OpenX API. Publishers can use the API too.

Publishers can also benefit from the identity graph by seeing their own readers’ behavior as well as what other sites they’re visiting.

OpenX’s strategy around identity was a major reason why the exchange moved its servers to the Google Cloud in January. “OpenAudience requires a massive amount of data handling and matching to process, which we are much better equipped to handle being in the cloud," Parsons said.

In order to protect privacy, OpenX said it’s been careful with the type of third-party data providers it brought onto its identity graph.

And browser initiatives to block cross-site tracking won’t break OpenX’s identity graph, Parsons said. “Everything that we do resolves to a person. Devices, cookies and households are all tied to an individual user through our matching technology,” he said. “We are not dependent on any one type of identifier.”