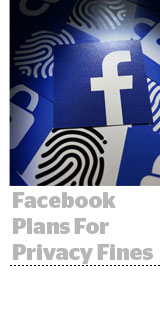 Facebook set aside $3 billion for a potential FTC fine, the company revealed Wednesday when it announced its first quarter earnings.

“We are focused on building out our privacy-focused vision for the future of social networking and working collaboratively to address important issues around the internet,” Facebook CEO Mark Zuckerberg said in a statement to investors.

Facebook’s daily active users across its family of apps increased 8% to 1.56 billion, while monthly active users also grew 8% to 2.38 billion. Two-thirds of Facebook users log in every day, while the remaining third log in at least once a month.

Facebook brought in $14.9 billion in revenue for the quarter, 93% of it from mobile.

“I believe there is more opportunity in the digital living room, to build a platform focused on privacy,” Zuckerberg said.

Meanwhile, Facebook is already seeing the effects of people’s desire for privacy in its user base. And it expects that it will only get worse.

“Ad targeting-related headwinds will be more pronounced in the second half of 2019,” CFO David Wehner said.

Since GDPR, it’s seen an “ongoing impact” in the number of people opting out of using context from third-party apps and websites, Wehner said, without citing specific opt-out rates. When people see less relevant ads, they don’t perform as well.

In the fall, Facebook will make it easier for people to see and clear their off-Facebook browsing history, which the company expects will also reduce the number of people who can see interest-based advertising. Over the long term, Facebook plans to hold all information for shorter periods of time, which could have a small impact on its ads business.

Facebook also removed targeting options for advertisers in housing, credit and job categories, a headwind for its ads business. Facebook serves 3 million advertisers overall, the majority of which are small businesses.

Facebook sees ongoing low monetization from its Stories ads, largely because it doesn’t offer as many direct response formats, which reduces conversion opportunities for advertisers.

And messaging, Facebook’s new area of focus, also offers limited options for monetization. On the user side, Facebook isn’t the top messaging platform in the United States, Japan or China, Zuckerberg said.

For monetization, Facebook never has (and never will) read the content of messages to target ads, meaning it won’t hold as much rich data there to serve ads. However, it plans to make all of its platforms’ backends interoperable, which raises the possibility that Facebook could use data from a more “public” platform and use it to inform ad targeting in messaging. Such a decision could be years away.

“Monetization for messaging is a lower priority,” Wehner said.