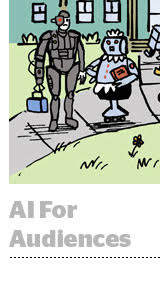 Nielsen AI is baked into the Nielsen Marketing Cloud platform and designed to process multiple external circumstances concurrently, which it can then use to build new audience segments dynamically.

And there were no solutions to build audiences quickly and effectively.

“This isn’t just about scoring,” said Kevin Lyons, Nielsen’s SVP of data science and digital technology. “We’ve been doing real-time scoring since 2011, and our competitors do that.”

Nielsen AI, Lyons said, is different because it lets media planners identify the parameters for a campaign. The AI system then automatically builds and validates a mathematical model around those needs before scoring the audiences and pushing them out to ad tech partners, who execute the actual buy.

Of course, Nielsen isn’t the only martech vendor dipping into AI these days, but Lyons said Nielsen competitors rely on batch learning, a methodology in which data has to be pulled, modeled offline and reinstated to enable scoring. So there’s a delay, and while audience scoring can happen in real time, it’s based on old data.


Nielsen claims its AI solution automatically adapts whenever it gets new information.

But Nielsen AI still has much to prove. Nielsen mostly is applying it internally, and Zagorski said about a half dozen Marketing Cloud clients are using it.

“That’s the other challenge: It’s a pretty heady thing to get your arms around,” Zagorski said. “We’re trying to make it as simple as possible and make it really results-driven.”

“In finance and investing, it’s important to develop audience targeting models in real time based on what’s happening in the moment,” said Nikesh Desai, the pub’s CEO and founder.

If oil goes up or gold goes down, for instance, what effect will this have on a client’s marketing campaign? Instead of building audience profiles based on data that’s a week old, Investing Channel wants to optimize that audience immediately.

Desai sees two major possibilities for Nielsen AI. First, the system could improve Investing Channel’s current ad products. If an advertiser wants to optimize spend, for instance, and run it evenly for a month, Nielsen AI can power that.

“Obviously, the unknown is how much lift this is going to impact, and what that could mean for new budgets,” Desai said.

He has high hopes. Recently, a client wanted to know how likely it is that active traders who are using advisers will put their assets under management and buy subscription products.

That correlation is currently unclear. But if Investing Channel can use Nielsen AI to make that connection, it’ll add much more value to its audience.