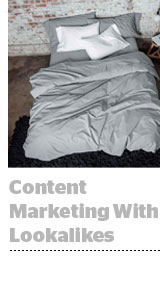 “We’ve struck a nerve with the consumer that does research,” said Justin Lapidus, general manager of Brooklinen.

The company has grown by a factor of 10 during the past two years, and it raised $10 million in Series A financing in March.

The sheets brand works with Outbrain’s content recommendation engine to promote positive reviews, blogs or sponsored posts featuring the sheets, such as articles on Cup of Jo and Business Insider.

“Where Outbrain provides unique value is communicating a message that no other channel has the ability to communicate, which is storytelling through a trusted, third-party voice,” Lapidus said.

But promoting these articles, though effective, worked as a top-of-funnel technique, which inspired Brooklinen to be an early tester of Outbrain’s lookalike audiences product. Using lookalike audiences, it was able to target consumers more likely to buy sheets with snippets of the positive articles.

The more precise audience targeting cut Brooklinen’s cost per acquisition in half.

“This is a way to hit the lower part of the top of the funnel,” Lapidus said. “Before they rolled out this functionality, it was super high-level people.”

Once a consumer reads one article, Outbrain can do content sequencing and show a second article.

“We have about 20 articles running right now, and there is no one that’s the bread and butter,” he said.

Instead, each publication tends to attract a different customer. Uncrate, for example, offers reviews that appeal to men, while a long-form blog post on Cup of Jo fits with how female shoppers like to research and choose products.

Brooklinen is one of 30 beta clients using Outrain’s lookalike audiences, which is opening up to general availability today.

What took Outbrain so long? Facebook Custom Audiences has been in-market for five years.

The delay was partly a matter of focus, said Outbrain head of product Amit Elisha. The content recommendation company focused most of its attention on its core offering, which is predicting what articles people wanted to click on. Also, marketers didn’t uniformly have data to activate in this way.

“A lot of marketers have a first-party data strategy,” Elisha said, a big change from 18 to 24 months ago. “That made us think: Any data point we can get, let’s take that data and use the conversion, what the customer is telling us, as another data point.”