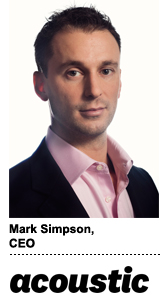 The TDB company that was formed when IBM sold the bulk of its Watson Marketing portfolio to private equity firm Centerbridge in April finally has a name: Acoustic.

Acoustic is starting out with a large stable of clients – around 3,500 – inherited from IBM, and a headcount of 1,100. It’s also hiring, with a particular focus on designers and data scientists.

The plan for Acoustic, which unveiled its new branding on Monday, is to create an independent marketing cloud that uses artificial intelligence to help marketers do their jobs smarter, faster, more affordably and with less complexity.

Which sounds great. But why should Acoustic thrive – and be able to compete with the pantheon of existing marketing clouds – when IBM, a behemoth in its own right, faltered in its attempt to make its mark?

It’s easier to innovate and be agile when you’re not part of a company of 400,000 people, said Mark Simpson, CEO of Acoustic and a former Watson Marketing executive, as well as founder of A/B testing and site personalization vendor Maxymiser, which sold to Oracle in 2015.

Although IBM spent years assembling the various parts it needed to be a marketing cloud, competing with Salesforce, Adobe and Oracle on that front was never a priority.

“IBM’s focus is less on the CMO and more on the CIO and CTO,” Simpson said. “Our sole focus is on serving the marketing department.”

As a separate entity with an enthusiastic backer, Acoustic can avoid “legacy technologies, an enormous amount of tech debt and the hassle of having a very disconnected marketing platform,” Simpson said.

The same is not true of Acoustic’s competitors, he said. “They’re slow, they have a lot of old technology and they’ve made acquisitions that were not joined together – and there’s no real vision for how to do so,” Simpson said.

Centerbridge will invest $10 to $20 million over the next few quarters to help Acoustic re-architect its platform so that the pieces work well together, there’s a single user interface, the data flows and good data governance and privacy protections are baked in from the get-go rather than tacked on as an “afterthought,” Simpson said.

“This is part of a much larger investment coming from Centerbridge,” he said. “And, frankly, we need this injection of fresh investment if we want to become a leading marketing cloud.”

But it won’t be easy nudging into a space populated by companies with a massive head start. To close the gap, Acoustic is betting on artificial intelligence use cases.

For instance, Acoustic will help marketers use AI to automatically tag images and video content to make it searchable, to optimize bidding on paid media placements or to detect anomalies in campaigns and proactively alert them when a tactic isn’t producing results.

“It’s not possible to just apply AI and call it job done, you need to bring expertise and translate AI capabilities into the workflow so that they benefit marketers,” Simpson said. “Thanks to AI and other technologies, the marketing cloud landscape will change more over the next five years than it has over the last 25.”