Every marketer and their mother wants to understand how teenagers congregate and communicate online. Even insurance companies are trying their hand at reaching this younger demographic.

Aflac launched its first-ever campaign on TikTok this week, dubbed #DuckVibes, to engage younger consumers with what it considers a mid-funnel-focused strategy, Head of Marketing Garth Knuston told AdExchanger.

The new campaign, which will run throughout the summer, uses catchy music, lyrics and visuals involving the eponymous Aflac duck to encourage “duets,” a split-screen feature TikTokers use to retroactively “respond to” other creators’ videos, he said. (In Twitter parlance, it would be a quoted tweet; on Instagram, it’s a shared story.)

Aflac’s core target audience spans the ages 25-54. Knowing that people are often unenrolled from their parents’ insurance once they’re 26 years old (that’s the rule for national health care), the brand hopes to start a relationship with prospective customers who will soon exit their prime mooching years.

While the average age of users on TikTok is increasing now that the social platform reaches beyond high school, Aflac sees TikTok as the ideal chance to “start introducing a new generation of consumers to the brand,” Knuston said.

“TikTok is a great place to start engaging a younger audience from where we’ve been traditionally – the Aflac brand was really built on linear television,” he added.

Aflac started off selling insurance policies the old-fashioned way: door to door. From brand-lift campaigns on linear TV to literal direct-to-consumer (DTC) business done by thousands of agents, Aflac has always worked in both the upper and lower purchase funnel extremes. In turn, the way the brand defines the mid-funnel is a little different.

While upper-funnel campaigns introduce the brand, Aflac defines the mid-funnel as “telling a little bit deeper of a story, and starting to get into how one could go about getting [more information about] Aflac, whether it’s through direct channels like our website or asking an employer about it at work,” Knuston said.

In other words, mid-funnel is meant to stoke interest and information, particularly through more interactive channels like digital and social. Aflac saves the term lower-funnel for direct marketing actions that could result in purchase, such as paid search, website conversions or speaking directly with an agent.

“With this campaign, we’re definitely focusing much more on the upper- and mid-funnel,” Knuston said. The goal is to build Aflac’s audience and both its awareness of and engagement with the brand so, when open enrollment rolls around in Q4, “we can continue to bring them through the mid-funnel journey and pull them through all the way down to the lower [purchase] funnel.”

Declaring a social pivot to mid-funnel marketing is Aflac’s way of saying that it’s serious about social. 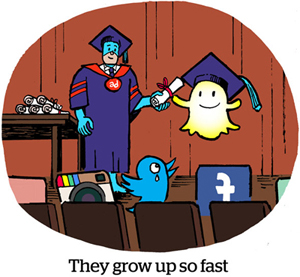 The company has “dabbled” in Snapchat before, but the #DuckVibes campaign is the “biggest social-first campaign in Aflac’s history,” Knuston said. Because TikTok pairs a young audience with a highly interactive platform, #DuckVibes was made especially for TikTok, and will be running on social video only.

One might say the Aflac duck’s social revolution will not be televised.

“We’re creating content that’s very audio-driven. We expect engagement to go beyond views, clicks and comments – we’re expecting people to take that audio and make their own video duets with it,” Knuston said. “This is taking engagement a step further.”

The company is also trying not to impose older creative or strategic perspectives on its TikTok work by handing the reins to its younger marketing team.

“The creative brief is the most important thing [for a brand] generating a new campaign – usually more senior people like myself will write the brief and deliver that to our agencies,” Knuston said. But it’s quite challenging to pique teenagers’ interests about insurance without having someone on the inside.

“This time, we went to the most junior people within the marketing team – the media, sponsorships and content teams – and said, ‘We want you all to create the brief, because you’re all using these [social] platforms,’” Knuston said. “So they did.”