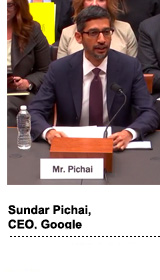 After around a year of avoiding the spotlight, Google CEO Sundar Pichai spent nearly four hours fielding a grab bag of questions from members of the House Judiciary Committee on Tuesday, discussing everything from the scope of Google’s data collection practices to alleged political bias in search results.

The problem, as is often the case with congressional hearings, is that lawmakers spent most of their time grandstanding, harping on partisan issues and asking misinformed questions.

For example, Rep. Ted Poe (R­–TX) held his iPhone aloft and repeatedly demanded whether Google would be able to use his phone to track him if he moved across the room. In response, Pichai began to explain that it depends what apps and services he has on his phone and what permissions he gave them.

Poe sharply cut him off: “This is a yes or no question.”

Pichai tried again … it depends. “I genuinely don’t know without knowing what services – ”

“It’s not a trick question – you make $100 million a year, you ought to be able to answer that question!” Poe yelled. “I’m shocked you don’t know … most Americans don’t know what this phone can do.”

Including, apparently, lawmakers. Poe and many of his colleagues were confused about how technology works. At one point, Rep. Steve Cohen (D–TN) asked why a Google search for his name displays links from conservative websites like The Daily Caller and Breitbart despite the fact that he appeared on MSNBC multiple times over the weekend.

But lawmakers aren’t alone in not knowing how algorithms work. It’s arguable that the average consumer doesn’t truly understand how much data Google collects about individuals, much of it through the Android operating system, or how to change their privacy settings.

Nearly 170 million visited Google’s privacy dashboard over the last 28 days, which sounds like a lot, until you consider that Google services billions of users.

Until someone actively disables data collection in their settings, Google collects specific search history, location data, device identifiers, IP address, geolocation data even if a phone isn’t connected to the internet and heaps of other data points. Google Home will record conversations if a user opts in.

Lawmakers argued Google needs to be more transparent about what’s being collected and clearer about how it’s being applied. Google’s privacy policy has been updated 28 times since 1999, including eight times since 2016. Even a lawyer couldn’t keep up with that pace.

“Google is many things: It’s one of the largest data collectors ever seen in human history, it’s an advertiser that can get the right product to the right consumer at precisely the right time [and] Google is also an internet giant directing over 3.5 billion searches per day,” said House Judiciary Committee chair Rep. Robert Goodlatte (R–VA). “With this massive authority, however, comes the potential for far-reaching abuse.”

Google, like many of its big tech cohorts, supports federal privacy legislation out of a sense of self preservation. Rather than having to face a patchwork of state-based privacy regs, the specter of which is hanging on the horizon with the passage of the California Consumer Privacy Act, set to hit in 2020, tech companies are looking for one set of rules. Pichai reiterated support for federal privacy legislation during his testimony.

But federal privacy legislation won’t necessarily mean Google or others have it any easier.

“If the federal government does step in to regulate, you’re not going to like it,” warned Rep. Thomas Marino (R–PA).

A few other bizarre highlights for the TL;DW (too long didn’t watch) crowd