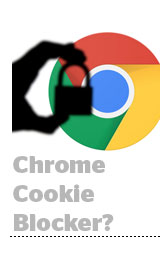 If Google Chrome follows Apple’s ITP and Firefox’s ETP to create a cookie blocker that limits third-party tracking, what would it look like?

Google is considering its options, according to an article by AdWeek that said multiple teams at the company – not just its advertising division – are contemplating how to limit third-party data collection in Chrome. AdExchanger independently confirmed the report.

In a privacy-focused climate among both regulators and consumers, Chrome can’t be the lone browser without an option to limit third-party cookies. It’s only a matter of time before Chrome introduces features that give consumers more choice and transparency around third-party data collection.

“Google is under a lot of pressure, because Apple has done a nice job marketing privacy to the consumer,” said Steven Francolla, CEO of AirDXP, a post-cookie identity company.

Chrome blocking third-party cookies could break much of ad tech by inhibiting retargeting. The news caused analysts to downgrade their rating of Criteo, which relies on third-party trackers for retargeting. Criteo’s stock declined over 25% from Friday to Thursday.

Restrictions on third-party cookies will also prevent third-party vendors like DSPs and DMPs from syncing up, hampering activities like data onboarding, said Jounce Media founder Chris Kane. Plus, blocking third-party cookies puts “the nail in the coffin for independent attribution,” he added.

Google won’t do anything close to ITP (for antitrust reasons)

Because Google frequently uses first-party cookies on Gmail and Google Analytics, among other applications, it faces antitrust concerns if it restricts the use of all third-party cookies.

Third-party cookies are used mostly by independent ad tech companies. A solution like Apple ITP, which blocks all cookies or gives them very short expiration dates, would hurt the competition and benefit Google, which could lead to anti-competitive complaints.

“We think Google could inflame already high antitrust concerns if it does something in Chrome … and these concerns likely outweigh any benefit from privacy changes they could make,” said Lloyd Walmsley, research analyst at Deutsche Bank, in a note to clients Thursday.

But if Chrome browser restrictions push more advertising into Google’s ecosystem, it could risk adding billions more to its already hefty list of antitrust fines.

“It’s a good bet that Google will go down the path of applying 60% of what Safari has already blazed the trail on,” Francolla said, citing public conversations and GitHub repositories he’s viewed from Chrome engineers. Engineers have already engaged on how to identify tracking domains and then modify a user agent string, two features used by ITP to limit cookies and fingerprinting.

Google could switch to an ad ID

iPhone’s IDFA and Android’s Advertising ID provide a wipeable tracker. Chrome could do the same thing.

“I think ultimately, [Google] would aim to develop an ID mechanism similar to IDFA/ADID,” said Nishant Desai, director of technology and partnerships at Xaxis. Google could build the ID into Chrome and offer it to developers.

The ID could include additional privacy-safe features.

“Knowing Google, they could try to do something creative and different,” said Beeswax CEO (and former Google employee) Ari Paparo. “For example, they could block third-party cookies and replace them with an IDFA-like persistent identifier, then auto-rotate it every seven days.”

Or Google could let advertisers and publishers use the Google ID. “Given Google's scale and direct relationship with consumers via the Google ID, it's in the perfect position to offer a privacy-friendly advertising solution that doesn't completely flatten the ad-supported internet,” said Ratko Vidakovic, founder of AdProfs, an ad tech consultancy.

“This may seem anti-competitive,” Vidakovic noted, but “Google has every incentive to keep the open web healthy.”

A Google ID could serve as a central place for consumers to manage their privacy – and even Apple CEO Tim Cook seems to be in favor of a central clearinghouse for data, Francolla said.

The easiest option with the least impact for independent ad tech: Google could make it easier for users to wipe or block third-party cookies.

The “less aggressive approach” for Google would be to offer options to users when they install or log in to Chrome to restrict cookie use, Paparo said. This method would be effective, but not nearly the “nuclear option” of deleting or blocking all third-party cookies, he added.

If Google offers consumers more choice, then Chrome would still have to develop many of the capabilities of Apple ITP. But it could deploy them more selectively, depending on an individual consumer’s preferences.

Google will not outsource blocking to an industry group

Google could avoid regulatory pressure by having an industry group decide what third-party trackers to block, but that’s unlikely to happen.

A master list of obtrusive third parties might not go over well. “This would be a little tricky since most of these third parties offer services that are similar to Google’s,” Desai said.

Notably, even Apple ITP doesn’t maintain a master list of trackers it blocks. Instead, Safari uses machine learning on the device, not the browser, to maintain a custom list of blocked trackers for each user.

To outfox Apple ITP, ad tech companies have created cookie-less identifiers, like fingerprinting or adding code to a URL through “link decoration.” These approaches raise privacy alarm bells, because they run without consumers’ knowledge, and consumers can’t wipe the information they collect. And that data could contain PII.

So browsers then have to figure out what workarounds have been developed, and stop them. For example, Apple eventually blocked Criteo’s early ITP workaround.

Google will likely want to avoid a solution that spurs a cat-and-mouse game around privacy. It has no incentive to push anti-tracking initiatives further underground.

“There are a bunch of ad tech companies that have invested development resources in ‘loopholes’ to get around ITP,” Jounce’s Kane said. “This could be a catalyst for those companies to double down on finding even more crafty ways to exploit loopholes.”