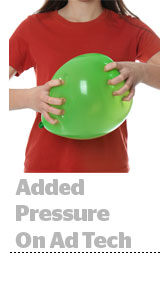 The economic volatility caused by the coronavirus pandemic will stress ad tech and accelerate consolidation.

Companies that aren’t financially sound won’t be able to handle decreased cash flow caused by a contraction in advertising spend. They’ll also be affected by delayed payments from upstream companies.

“There’s going to be a culling. This will expose ad tech companies that haven’t been prepared, mission critical or don’t have a strong value proposition,” said Steven Wolfe Pereira, CEO of media company Encantos and the former CMO at Quantcast, Neustar and Datalogix.

The duration of the coronavirus pandemic will also affect the severity of the effect on ad tech.

“There was talk of this being a one-quarter blip a month ago. I don’t think that’s the case anymore,” said PubMatic CEO Rajeev Goel. He’s doing scenario planning around a variety of timeframes, adjusting as he gets new information about most likely outcomes.

Here’s how ad tech leaders are protecting their companies and preparing for an economic downturn.

Preparing for a liquidity crunch

Got piles of cash lying around? You’ll need it.

Companies without cash reserves will have to manage a two front liquidity crunch. First, despite having the same amount of overhead, everyone will have less money coming in. Second, partners are more likely to pay slowly to manage their own cash flow issues.

“If the money flow seizes up, that has implications for how companies can weather the storm,” Goel said.

So if a travel advertiser doesn’t pay its agency right away, that agency might delay payment to the DSP, the SSP and the publisher, so the entire supply chain is waiting to get paid, despite having already fronted the money to execute the travel advertiser’s campaign.

Companies across the ad tech supply chain are quietly looking into the finances of their monthly payers, and have identified the weak ones to keep an eye on. Some have already been asked to delay next month’s payments.

And with less money overall, advertising companies are slashing salaries and laying off staff to stay afloat. (Read the latest on that here.)

People remember those who helped them out during a rough time, so many ad tech sales teams have been instructed to be helpful to clients and share information instead of upselling and pitching.

Tapad, for example, has shared insights with its agency clients about changing media use.

SpotX is also focusing most on being helpful to its clients, said Chief Operating Officer Sean Buckley.

“Most of our time right now is focused on our existing relationships,” he said, and most of SpotX’s business comes from longstanding clients. “New business is going to be quite difficult in this environment for the foreseeable future.”

Lean into diversification – or luck

Companies in the strongest position have large, diversified client lists. Niche ad tech companies that appeal to travel or SMBs, for example, will feel more pain than a generalized ad tech company.

Other ad tech companies aren’t diversified, but specialize in verticals benefiting from changing consumer behavior, such as those with large CPG clients.

And with sports evaporating from linear TV, many advertisers are considering moving more budgets into streaming TV.

“Out of all the formats, I think OTT will end up being the most resilient,” Buckley said, adding that SpotX is having conversations with buyers who want to reallocate their linear TV sports budgets to streaming.

While some companies are reporting lower CPMs at the moment, digital media and the ad tech companies that serve these companies may fare well: “To the extent to which there is flattening in ad spend, digital media is less impacted than in other areas. Our access to our phones and tablets hasn’t changed, and in fact it’s become more of a part of our lives compared to a month ago,” said Tapad Chief Operating Officer Mark Connon.

The economic impact of the coronavirus pandemic may even yield a silver lining a couple of years down the line.

The current economic stress may lead companies to focus on their core strengths, creating room for new startups to solve pressing problems ad tech faces around identity and privacy – a silver lining in a challenging time.

Or the triopoly will grow stronger.

“I think this will have a worse impact than the 2008 great recession. But you will see similar traits where businesses will try to be opportunistic and acquire assets or talent,” Pereira said. “The strong will get stronger and the big will get bigger because of their scale.”