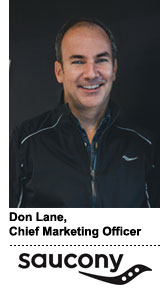 Serious runners wear Saucony, the Boston-based footwear brand. But there are also many runners who don’t define themselves as hardcore.

Rather, they’re attracted to what running enables them to do: Stay fit, enjoy good food or run for a cause.

Saucony is tapping into that mentality through its Run for Good campaign, an Instagram-based relay race where miles translate into charity donations.

During the first week of the campaign in June, more than 2,000 public Instagram accounts posted selfies of their completed runs. Even more private accounts posted, but Saucony can’t track those.

The engagement rate on Instagram averaged 140% higher than Saucony’s benchmark. Almost 7,000 people were tagged in posts encouraging them to run the next mile – key to keeping the relay going beyond the 33 countries where runners have already participated.

The inspiration behind Run for Good came through market research and focus groups that CMO Don Lane commissioned when he joined the sneaker company in November 2018.

“We got feedback that Saucony is a beloved brand in our community – and that we had lost our way,” Lane said. “We weren’t clear on what made us special.”

He wanted to figure out how to make more people feel that the brand was right for their needs, even if they weren’t marathoners.

“Most people don’t describe themselves as runners,” Lane said. “But if you ask them why they run, they can’t stop talking.”

Run for Good connects the act of running to a greater cause, not shaving seconds off a personal record.

The campaign is designed to be spread organically on Instagram. “We have very modest, minuscule paid support,” Lane said. In addition, $50,000 will be donated to charity.

However, a paid social push to promote a Saucony product in May included a new “attitudinal” targeting overlay that reflected what Saucony found out from its focus group.

Although Lane declined to share the actual marketing persona details, which are proprietary, click-through rates quadrupled compared to a previous campaign that only targeted a broad demographic. Saucony knew it had found a target and message that was resonating.

“By narrowly defining what we are saying and who we are talking to, we open up our engagement because we stand out more clearly,” Lane said.

Because Saucony is primarily sold by salespeople in running specialty shops, the Run for Good campaign has a “B2B2C” element to it. Lane hopes that the effort inspires the salespeople who sell Saucony products and also encourages them to be influencers by spreading the word about the relay.

Before the launch, Saucony held a two-day event for its top 100 salespeople to share its new brand purpose. They participated in Run for Good and are now more likely to share their excitement with customers on why a Saucony product is superior to another brand leader.

Saucony wants to be one of the three pairs of shoes that a running specialty salesperson will bring to a prospective customer. A leader such as Nike usually gets the first spot, the second often goes to a flashy or innovative product – and Saucony is gunning to make sure it’s the third pair.

“We are hearing from our distribution channels that [Run for Good] helps their salespeople understand what we stand for, and it’s a reason to bring the products out,” Lane said.

But the Run for Good effort is different, Lane said.

“I don’t compare this to that great campaign Nike did with Kaepernick,” Lane said. “This isn’t designed to be a corporate social responsibility program, but a way of defining who we are. We want everything we do to live up to the idea of Run for Good.”