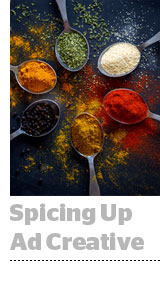 Spice manufacturer McCormick’s online ads draw in consumers with recipes that include unexpected but on-trend pairings, like a Greek yogurt taco dip.

But creating many versions of online ads ran up costs with its creative agency.

“We would get very targeted with our media campaigns, and we wanted our creative messaging to follow suit,” said Thomas Rowe, digital marketing operations manager at McCormick. “To do that with an agency partner can get very costly.”

Tasked with looking for efficiencies in the digital planning and buying process, Rowe turned to Thunder, a creative management platform that enables programmatic creative.

McCormick used Thunder’s templates to swap recipes into its ad units with minimal extra effort. The creative agency focused on messaging and assets rather than creating multiple versions of an ad.

“The platform gives us the ability to be flexible and nimble to get assets in the market without the turnaround times or additional costs,” Rowe said.

Thunder’s template-based approach makes it easier to create holiday-themed recipes for cinnamon, for example, and later swap those out for more general recipes.

Because McCormick can create more versions of each ad creative, it has more opportunities to land on a high-performing creative.

Turmeric is a hot ingredient at the moment, in part because of its perceived healthfulness. Thunder helped McCormick test different messaging ideas for the ingredient, from turmeric chicken to golden milk. McCormick then targets those ads contextually to pages that mention turmeric.

“People are interested in getting more turmeric in their diets,” Rowe said. “Before, we would have to place our bets on one, maybe two recipes. With Thunder, we can put 10 recipes and 10 variations and let the performance of those ads pick the winner, rather than basing it on some assumption on our side.”

“[The ad creative] is incrementally better,” Rowe said. “When you are dealing with the number of impressions to serve, an incrementally better click-through rate can mean a substantial difference in the amount of traffic and engagement on our website.”

McCormick started using Thunder at the end of 2016, with campaigns running during the holiday season when spice consumption is high. The brand plans to expand its use of Thunder this year from a handful of creative variations to something truly programmatic, Rowe said.

“Down the road, we are looking to do addressable creative, where we are connecting a user, a moment and a message,” Rowe said. “Instead of being limited by the means of production, we can let the system do it for us.”