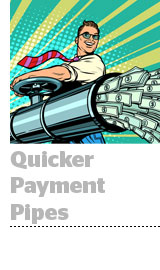 Publishers get paid for their ads 60 days or more after they appear – if exchanges pay on time. That delay forces publishers to keep more cash on their balance sheet. Instead of investing profits to grow their business, they hold onto that cash to cushion late payments.

OAREX (Online Advertising Revenue Exchange) is one of the companies swooping in to help small to midsize publishers who want to get paid immediately. OAREX will buy a publisher’s invoices, a practice known as “invoice factoring,” giving them 80% to 90% of their value upfront. Once they get paid, they release the balance of the payment minus their fee.

Besides OAREX, FastPay and Sovrn provide publishers with quick access to funds.

OAREX has been in operation since 2013, and started offering factoring in 2015 – but its profile is rising as layoffs and bankruptcies make publishers more skittish about getting paid by ad tech companies. When Sizmek went bankrupt, it exposed the fragility of the ad tech payment model. Exchanges are owed millions of dollars by Sizmek, but need to use the bulk of those payments to pay publishers, putting them in a tricky position.

“We are in the midst of a shakeout,” OAREX CEO Hanna Kassis said. In any new market, growth is followed by compression of profits and then a shakeout, where weak companies fold, he said. Ad tech’s shakeout stage will continue until only cash flow-healthy companies remain.

This volatile environment is important because weaker companies, or those going through tumult like an acquisition, tend to pay late. AppNexus started paying four days later after it was acquired by AT&T, Kassis said. It then extended payment terms with OAREX’s publisher clients.

About 36% of the companies OAREX works with paid late in 2018. The company also sees exchanges inching back payment terms 15 or 30 days, like Index Exchange recently moving some of its publishers from net 60 to net 90.

On the large company side, Apple and Amazon consistently pay OAREX’s clients on time or early.

The gold standard for payment is Google, which publishers can rely on to pay within 30 days, half the time of most other exchanges. Even the strongest independent ad tech companies can’t match Google’s 30-day, always-on-time payment terms.

So far, OAREX hasn’t ever been left holding a worthless invoice from a bankrupt company. It never approved Defy Media or Videology in its system, for example, because it checks a company’s credit rating, payment history and any pending legal issues. Defy Media didn’t pass its internal test.

To protect itself, OAREX also requires that its publishers monitor for bot traffic. It doesn’t want to buy an invoice that an exchange later rejects because the audience was fake. That’s also why it only pays 80% to 90% of an invoice upfront – to account for small, invalid traffic adjustments.

OAREX runs lean, with just six team members selling to new clients or following up with companies about late payments.

The asset-based lending firm Arena Investors gives OAREX access to a line of credit it uses while it waits for exchanges to pay. Kassis runs the Cleveland, Ohio-based company, and tapped ex-Goldman Sachs employee William Grathwohl to serve as OAREX CFO.

“We are seeing payment terms getting longer and more volatile,” Grathwohl said. “But the payment amounts have been getting less volatile. There are fewer offsets.”

OAREX’s rise happened in lockstep with the rise of viral publishers, many of whom formed its initial client base. Kassis ran a blog that he plugged into AdSense. Although he only netted a few thousand dollars, he connected with a community of viral publishers that needed help getting paid quickly.

Because these viral publishers often bought their audience via platforms like Facebook, a practice known as content arbitrage, they needed to bridge the gap between their payments to drive Facebook traffic and when they got paid by advertisers.

However, as Facebook clamped down on viral traffic, OAREX’s client base shifted. Viral publishers went from 100% to 20% of its client base. The surviving viral publishers mostly skew toward “highbrow” viral content, Kassis said, avoiding heavy ad loads or clickbait slideshows. If exchanges don’t approve of that content, OAREX can’t fund them.

OAREX clients tend to be publishers who make between $50,000 and $5 million per month, Kassis said, the company’s “sweet spot.” They include app developers and podcasts, or publishers with a track record of developing properties quickly. These new, small publishers want access to cash more quickly, but don’t qualify for bank loans.

As OAREX expanded beyond viral publishers, it started serving ad tech companies and agencies who need to get paid by their partners more quickly, and has since purchased invoices from mobile SSPs, ad networks and podcast networks.

On the demand side, customers include agencies, including some focused on OTT, app installs and even some PR and creative agencies, Kassis said.

For these customers, getting paid more quickly frees up cash, allowing customers to take risks in other areas. “We create certainty for the client. They know how to plan for their business, because every month we fund last month’s revenue,” Kassis said.