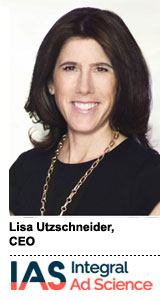 Since Lisa Utzschneider was hired as CEO of Integral Ad Science in January, almost the entire senior leadership team has turned over, a sign of swift change at the Vista Equity Partners-owned ad tech firm. The acquisition closed last July.

Eighteen C-suite, SVP and VP-level executives have been hired since the acquisition and Utzschneider’s hiring, while another 15 left, according to LinkedIn data, which was confirmed by IAS.

“I needed to bring in leaders who can help scale the company, have global experience and are change agents,” Utzschneider told AdExchanger.

Plus, IAS Chief Financial Officer Jane Rode will leave at the end of the year, AdExchanger has learned. Utzschneider is conducting a search for a new CFO.

And the company is on a broader hiring spree. The company has 52 job openings on LinkedIn.

Total employee count has grown 24% over the past year, to 696 employees, according to LinkedIn – though the number is inflated by temporary interns. An IAS rep declined to share company size but confirmed the company is “growing extensively.”

As part of that growth, Integral Ad Science is opening a “center of excellence” in Chicago, where it will add up to 150 jobs in the next 12 to 18 months, including in technical areas like data science, analysts and engineers.

Vista identifies ideal candidates with a proprietary test, described as kind of combination of a PSAT and a personality test. Vista has said that its test leads to a more diverse workforce.

In November 2018, all IAS employees also took Vista’s test, and the results became the benchmarks for new hires to meet.

As it turned out, IAS employees test well, and IAS’s benchmarks were exceptionally high – in some cases making it a challenging bar for new hires to meet, sources said.

The test is “one data point of many” used in hiring decisions, Utzschneider said. “It’s interesting to see which candidates take the assessment seriously, and ask questions and go online and take practice tests,” she said. “I’ve found that can be an indicator of a candidate’s genuine interest and intellectual curiosity,” she said.

Seventy-three percent of people who left held advanced degrees, compared to 50% of new hires. Forty percent of those senior leaders had MBAs, most from top schools – former CEO Scott Knoll has a Harvard MBA. Among the new VP-and-above hires, only 22% hold MBAs.

“I have a long history and track record of hiring on potential, and that’s what we will continue to do,” Utzschneider said. The company also makes sure it creates a diverse candidate pool, she said.

An employee refresh may have been necessary regardless of Vista’s ownership. A former employee observed that the departing senior team, though talented individually, never seemed to “gel” as a team, making it difficult to move projects forward.

With Utzschneider at the helm, Integral Ad Science is overhauling its product road map.

“There has been a lot we’ve de-prioritized,” she said, referring to products in the works before her hire.

IAS is focusing on extending its capabilities to OTT and CTV, which is in beta right now and will move to general availability in Q1. “Where the marketing dollars go, fraudsters go,” Utzschneider said.

Utzschneider, who led both Yahoo and Amazon sales teams, is also bringing that sales DNA to her leadership. “Product teams now sit in on sales meetings, explaining the product road map and listening to customer requests,” she said.

IAS is still working out its road map for 2020. Besides continued development of its video and OTT products, it will work to enhance brand safety on platforms such as Facebook, Google, Amazon and YouTube, she said.

Utzschneider said the legacy IAS employees from before her tenure are committed to change. They “are up for the ride, and want to be part of the transformation,” she said.

A survey conducted just before she joined as CEO asked employees to agree or disagree with the statement “I understand with growth, comes change, and that change is inevitable.”

Nine out of 10 employees agreed.