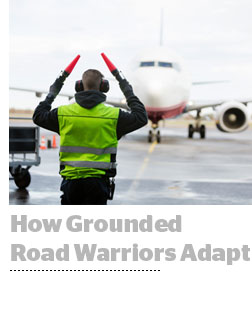 For David Simon, Cuebiq’s SVP of channel partnerships, RampUp was the beginning of the end.

The changes are mostly good – so far.

For business travelers with the most frequent flyer miles, the biggest transition right now is moving from in-person meetings to video conferencing.

While it’s hard to replicate the informality of catching up over a few cocktails during an event, video conferencing can replace some of that intimacy, said Matt Barash, SVP of strategy and business development at AdColony.

“Video conferencing [provides] an open door into the sanctity of our homes,” he said. “I love the fact that it’s become totally normal for meetings to include pets and kids and not just colleagues and managers.”

The fact that everyone is working from home together – albeit separately – is also spurring bonding.

“Right now, I’m bullish on video meetings,” said Cory Davis, director of partnership development at Infutor. “I’ve quickly noticed a different, more casual tone in new deal conversations as we’re all in a more vulnerable state sitting on our couch or having our kids or dogs in the background.”

Good businesspeople know how to read a room, so bringing that nuance to pixelated video calls poses a challenge.

“The ability to read the ‘micro-expressions’ on a partner’s face are lost,” said Chris Brinkworth, principal consultant at SynergyStack.

During video calls, he finds it harder to tell if people understand what he’s saying.

“I’ve trained myself to say, ‘Did I explain that correctly?’ to ensure the other parties don’t feel bad saying, ‘Can you explain just a bit more?’” Brinkworth said.

“One thing I will really miss from conferences is giving the event my full attention, which is harder to do in a virtual conference or webinar setting,” she said.

On the other hand, adding video to a meeting encourages more focus than a simple phone call.

“Don’t do traditional conference calls just because they seem more convenient,” said Mike Germano, president of Communo, which connects agencies with freelance talent. “The biggest benefit of video is that it encourages colleagues to look at you and to be fully present, which actually should speed up a lot of meetings.”

In this climate where working from home is often mandated, people are using video conferencing to conduct business that would normally be reserved for in-person meetings.

“People are open to video calls for everything pre-, during and post-business deals,” said Steven Wolfe Pereira, CEO of media studio Encantos. “I have friends who are raising venture capital over the phone. That will change business dynamics.”

To reproduce the camaraderie of sharing a meal or drink together, companies are also trying out virtual happy hours or lunches – sometimes with clients, other times to boost internal morale. SpotX started a work-from-home Slack channel as employees grapple with the new normal without water cooler catch-ups.

With working from home still fresh for many, it’s hard to tell what its long-term effects will be.

Once they’re able, grounded road warriors expect to return to the air. But after business professionals work from home for weeks or months, they may change their tune about what business travel is necessary and what needs to be done in person.

“We have reached an inflection point,” Barash said, “where remote working is suddenly the norm and no longer an experiment.”