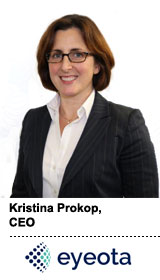 Eyeota co-founder Kristina Prokop is returning to lead the data company as CEO.

She replaces Kevin Tan, who led the company as CEO for the company’s first decade. He stepped down for an undisclosed reason, but will remain on the board.

“There are different talents and types of leadership needed at different stages of the company. Kevin has done an unbelievable job building this company and bringing us to the place we are today, and all of us are thankful for that,” Prokop said.

Eyeota operates a third-party data marketplace, onboards offline data and helps partners use second-party data. Its business is split across Europe, APAC and the United States.

Prokop had worked at Eyeota since its founding 2010, most recently as Chief Customer Officer. She left day-to-day operations in May, but retained her seat on the board.

But when the investors wanted to name a new CEO with her depth of knowledge and experience with the business, she eagerly stepped back in.

She’s prioritizing two things as she steps into the role.

First, she will be preparing for the California Consumer Privacy Act and other privacy regulations. She had previously led Eyeota’s efforts to comply with Europe’s General Data Protection Regulation. “The privacy aspect is critical – that we as an industry don’t lose any more trust from consumers,” she said.

Eyeota will also focus on creating its own ID solution and cooperate with industry unified ID initiatives. It already works with ID5’s universal ID and The Trade Desk unified ID.

The company is also experimenting with more marketing tech applications of its data. For example, it’s tested using its data to power site personalization, with promising early results.

“I see 2020 as a year of expansion outside programmatic,” Prokop said. The same data used to target programmatic ads can help marketers understand and analyze their own audiences and tailor their experiences.

Even during a time of challenge for third-party data, its business is still growing, Prokop said. And it’s a relatively small part of its overall business compared to its work activating second-party data, or “branded data,” for partners like Experian, Kantar, YouGov, Dynata, Equifax and GDR.

As the company goes into its tenth year, it’s focusing on growth first, while keeping financial discipline. For example, its technical team is working on a way to make the cost of maintaining 4.5 billion profiles more efficient.

“We do want to be very disciplined about the cost side of the business – but we’re not going for profitability at the cost of growing our business,” she said.