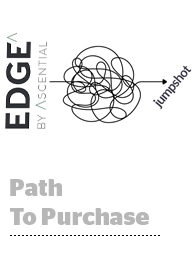 Ascential, the company that owns the Cannes Lions festival and MediaLink, just bought a slice of the ad tech ecosystem with a 35% stake in marketing analytics company Jumpshot.

The investment, worth $60.8 million, values Jumpshot at nearly $173 million.

What does the parent company of ad land’s favorite international get together want with a marketing analytics company?

Last year, Ascential launched an internal business unit/advisory service of its own called Edge by Ascential that provides web analytics to help marketers get a sense of how their sales are doing compared to the wider market, particularly Amazon.

In a similar vein, Jumpshot uses a global panel of around 100 million devices to track online behavior across the URLs that users visit prior to converting or doing some other action.

Ecommerce brands can use this information to optimize the path to purchase, said Jumpshot’s CEO Deren Baker.

“We can say, ‘This is the consideration set of brands that people who bought your product also looked at online, here are the marketplaces they visited other than Amazon, here’s the YouTube video they watched that heavily influenced their decision-making process,” he said.

And Ascential can introduce Jumpshot to its network of top level marketers.

“One of the hardest things for Jumpshot is to figure out the right person at a brand who really understands the online digital ecosystem,” Baker said. “Ascential has a lot of those partnerships in place through their existing products and events – and if we can align ourselves with them, that immediately validates us.”

It’s still TBD exactly how deeply Jumpshot will integrate its technology with Edge by Ascential.

It’s also to be determined whether Ascential becomes Jumpshot’s majority shareholder. For the moment, it’s still owned by Avast, a security software development firm that acquired Jumpshot in 2013. In two years, however, Ascential will have the option to buy an additional 16% stake in Jumpshot based on the company hitting certain financial targets, and that would give Ascential majority ownership.

If that happens, the two will likely embark on a deeper product integration.

Although it might seem odd on the surface for the company that organizes one of the largest gatherings of creative and agency executives to shell out on ad tech, Edge is evidence that Ascential sees opportunity in helping marketers do more than win awards for the big idea.

“We’re probably the most ad tech-like investment they’ve made, but, to be honest, the difference between ad tech and digital analytics is a very fuzzy line,” Baker said. “We’re both in the business of helping brands market more effectively.”