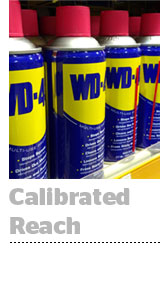 Linear TV may provide massive reach, but WD-40 had a particular audience in mind for its most recent campaign: a subset of millennial workers with jobs in hands-on industries.

And so WD-40 turned to connected TV, focusing on a branding message celebrating “doers.”

Executing its branding campaign programmatically allowed WD-40 to target that high-level message toward viewers likely to use the product: millennials between the ages of 18 and 37 who work in farming, construction, auto, trucking and manufacturing.

It’s a high priority for WD-40 to introduce its product to millennials, since internal company research shows that the all-purpose lubricant, first sold in the 1950s, resonates most with an older generation.

The year-long campaign, which served more than 1 million impressions over its initial three-month period and will continue through September, is averaging a more than 93% video completion rate, a key engagement KPI for WD-40. The brand also saw early signs of continued interest, including spikes in traffic to the WD-40 ecommerce site.

“This is an accessible, highly targeted way of getting the impression volume we need to connect with the next generation of consumers in a cost-effective way,” said WD-40 brand manager Felicia Reno.

Before this CTV campaign, WD-40 mainly ran display ads with product information. But it eventually realized that this approach prevented it from sharing the usefulness of its product with a younger demo.

By the same token, a TV buy might offer a splashy venue, but would also create too much waste by reaching customers outside of WD-40’s target group. CTV provided an answer.

But there were considerations.

One concern going into the campaign was access to quality inventory, said Chris Dyer, director of client strategy at BV Accel, WD-40’s agency.

The agency team worked with Telaria to set up private marketplaces that fit the brand’s quality specifications and included hyper-contextual, premium placements, such as HGTV.

Telaria’s reporting transparency allowed the agency to verify where the ads were served.

The agency used its DSP, Trade Desk, to aim for a frequency of two to three and then added additional parameters, including geographic targeting toward areas with high consumption of WD-40, Dyer said.

Because the campaign continues to provide effective reach, WD-40 is keeping a level investment in programmatically targeted CTV, and just cycled in five new creatives to replace the three at launch.

“Even with resource constrictions, there is a cost-effective way to reach the right people at a high volume within budget,” Reno said.