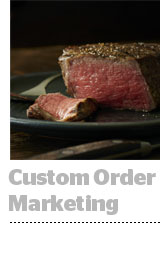 Geavaras will dial back Black Angus’ heavy print expenditures, replacing them with digital. She also plans to segment customers and customize messages to address diners’ preferences – wine lovers or families, for example. Her goal is to attract new diners while serving the core pyschographic that frequents the steakhouse.

A two-decade veteran of the restaurant industry, Geavaras sees technology changing how diners find out about restaurants.

“Consumers use Yelp and OpenTable to make their dining decisions. I live in LA and live by Eater LA and Thrillist,” Geavaras said.

Black Angus also works with marketing services providers like Cardlytics that use credit card data to give the chain a better idea of other restaurants its diners frequent and to analyze its own customers.

Geavaras’ first order of business is to find out who Black Angus diners are. Just a few weeks into the job, she’s in the midst of a consumer segmentation study that will give her primary and secondary marketing targets. From there, she plans to address customers – and especially the nearly 1 million members of its loyalty program – in ways that speak to their dining interests.

“If they really like wine, it’s important to them to know we expanded the wine list and added a nine-ounce pour,” Geavaras said. And it’s not so important to email them about a kid’s meal if they’ve never ordered one.

Because Black Angus diners skew older, Geavaras will move cautiously to change up the marketing mix. But she believes that she’ll find those diners on Facebook, not just catch them between the pages of a magazine.

Geavaras plans to shift spend to digital channels such as Facebook, Yelp, Pandora and Spotify to target local customers.

And there are even ways to make Black Angus’ guest list addressable via Facebook. Geavaras is looking into using a company, Bridg, that will scan Black Angus’ point-of-sale system, match it to credit card data and find those users on Facebook to retarget them.

Besides shifting spend into social platforms, Black Angus will work on an influencer program, which Geavaras likes because it creates a dialogue between the brand and the diners. “Instead of a one-sided push message, it’s kind of like an open chat room,” she said.

A panel of consumers will also help Geavaras for the other part of her job: testing different food concepts and menu items that will appeal to the company’s database of guests.

As head of marketing, she decides what new sauces, butters, proteins and drinks will appeal to new and returning diners.

Black Angus is testing “Badass Burgers” on the menu and cocktails that incorporate rosé, the wine of the moment. In the future, Geavaras will use online concept testing to help evaluate potential new hit menu items.