Game On: Zynga Will Spend $250 Million To Acquire Mobile Ad Company Chartboost Programmatic, Meet CTV: Ad Tech’s Latest Gold Rush PE Firm Apollo Is Buying Verizon Media For $5 Billion OpenAP Releases Identifier So Advertisers Can Buy And Measure Across Linear And Digital IOS 14.5 Is Live, ATT Enforcement Begins – And Here’s How We Got Here Apple Is Expanding Its Ad Business On The Cusp Of ATT Enforcement (Yep, You Read That Right) IOS 14.5 – And ATT Enforcement – Is Finally Coming Next Week It’s IPO Day For AppLovin, And CEO Adam Foroughi Explains Why First-Party Helped The Company Get There Dollar Tree Launches Its Retail Media Network (We May Have Just Hit Peak Retail Media Network)
» 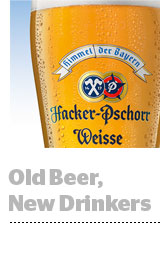 The German beer has been popular among German expats in Chicago and Minneapolis for the past few decades. But with the core demographic aging and dialing down its beer consumption, Hacker-Pschorr needed to look at a younger generation that favors craft beer.

Because Paulaner USA is a small importer, it only has budget for one big digital push a year, and it turned to The Onion to get its brand message across.

“We believe that the consumer is tired and worn out from the craft beer explosion, and they are ready to come back to the ‘definers of the style’ brands,” said Steve Hauser, CEO of Paulaner USA. And Hacker-Pschorr, brewed according to German purity laws, is an “original craft beer,” he added.

The Onion served as the agency, taking Hacker-Pschorr’s creative brief and coming up with humorous videos messaging about how the beer’s quality is passing from an older generation to a younger one. In one video, an elder encourages a smartphone-obsessed millennial to “Give a Pschit” about the beer they’re drinking.

The campaign, which went live April 3 across The Onion and Facebook, is already showing encouraging results. Sales are up 16% year over year. Prior to the campaign, Hacker-Pschorr sales were up 2% for the first quarter.

There’s a caveat: Distributors often buy extra beer in anticipation of a media push, but Hauser is still encouraged by the results and expects an overall sales lift in the 5% to 7% range by the end of the month.

Hacker-Pschorr often runs sweepstakes at the retail level, and it’s seeing above-average interest. “We would average 1,500 entries over a two- to four-week period. Over the first five days, we’ve seen 2,700 entries,” Hauser said.

And it’s also getting plenty of reach. The campaign has generated 2.2 million total impressions across social, The Onion and Hacker-Pschorr’s website.

On Facebook, the campaign posted a 65% view rate, with just over 100,000 views and an engagement rate of 42%. Instagram posted a 20% view rate. Video views totaled 191,395 in the first week, with the caveat that half of those views were rollover views considered less valuable.

Reintroducing the brand to consumers is important to Hacker-Pschorr, since it’s a brand many know but few ask for.

“The Onion’s brand gives us relevancy to the target consumer in ways we would struggle to achieve not borrowing interest from the brand,” he said.

Because of the encouraging early results, Hauser will consider another native content-focused digital campaign, perhaps around Oktoberfest, for other brands in Paulaner USA’s portfolio.

So if this campaign helps Hacker-Pschorr’s weisse beer become an alternative for Goose Island drinkers, that will be the ultimate success metric, more so than a sales uptick.

“We believe that the consumer is tired and worn out from the craft beer explosion, and the pendulum is starting to swing back to brands you know that have quality, history and heritage,” Hauser said.