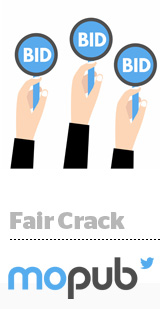 On Tuesday, the Twitter-owned mobile ad exchange started testing an advanced bidding solution to replace the app ads waterfall with a unified auction.

Roughly a dozen publishers are testing the solution. The closed alpha test does not have a set end date.

Until now, advertisers could buy MoPub inventory programmatically, but other demand sources were mediated through a more traditional daisy chain of tags.

Just like their desktop compatriots before them, app publishers are challenged by a lack of access to real-time demand. But unlike on desktop, where publishers can add wrappers to their headers to level the playing field, a different set of dynamics is at play for apps.

For one, there is no header in an app, which means publishers need to integrate the buyer’s third-party software development kit to properly render mobile-specific creative formats, like rewarded video or playables.

An in-app auction also needs to include ad networks, which usually don’t compete for inventory in real time, relying instead on prices based on historical performance. Although mediation platforms help optimize the pricing, publishers will still miss out if there’s a demand partner further down the waterfall willing to pay more for a given impression.

MoPub is well-positioned to facilitate a unified auction, however, considering its existing publisher relationships and demand-side platform integrations. Now it’s just a matter of getting the ad networks on board.

Although ad networks drive a large portion of publisher revenue, said Boris Logvinskiy, head of product at MoPub, “the technology hasn’t been there for them to effectively bid on a real-time basis.”

But ad networks are waking up to what they’re missing out on by relying on mediation.

“Ad networks are starting to realize that by not bidding in real time, they’re not seeing valuable impression opportunities,” Logvinskiy said. “They’re realizing that they could be driving better performance for their clients.”

MoPub’s advanced bidding solution brings ad networks into the real-time buying fold. Publishers send ad requests to MoPub, which runs a unified auction across network bidders, demand-side platforms and its own marketplace. The highest bidder wins, sends the ad creative to the publisher and the ad network bidding SDK renders the ad creative.

The process also reduces latency. In a waterfall setup, publishers keep passing their impressions down the chain until they find a buyer. “But when lots of partners can bid in real time, the ad is ready to serve,” Logvinskiy said, “which greatly increases the ad delivery to a device.”

Despite hosting the auction, Logvinskiy claims MoPub will not advantage its own marketplace demand.

“We want to run a fair and transparent auction,” said Logvinskiy, noting that MoPub’s road map includes a plan to build tools on top of the advanced bidding solution that prove its good intentions.

In fact, it’s too early for Logvinskiy to even say whether advanced bidding and enabling more competition between demand sources will mean fewer wins for MoPub.

“But that would be OK,” he said. “As long as publishers are seeing value and we’re driving ROI for advertisers, we’re in a good spot. As for what the dynamics will bring, that’s TBD.”