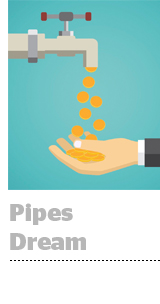 The revenue opportunity around mobile ad spend is too big to ignore, said Dan Rosen, global director of advertising at Spanish telco Telefonica, at Mobile World Congress in Barcelona in early March.

It’s why telcos like Verizon, Telenor, Telstra and SingTel are spending big on ad tech. Telefonica carved out a niche in the mobile ad ecosystem with the launch of the mobile ad exchange Axonix in 2014 and Axonix’s £3.5 million acquisition of mobile location data startup Statiq, revealed Friday.

Telcos are rich sources of location data – which can be used to segment people based on where they go and what they do – and they have the deterministic backbone to match that data back to.

But with rich data sets come responsibility, scrutiny – and regulations.

The General Data Protection Regulation (GDPR) in particular, set to take effect in Europe in 2018, will pose challenges for anyone in the digital advertising space. But mobile operators are used to dealing with heavy regulations, Rosen said.

GDPR is actually helpful because it “creates clarity,” said Mark Connon, AOL’s chief mobile officer. He claimed telcos are extremely careful preserving consumer privacy since “their relationship with customers takes precedence over everything.”

Yet Verizon, which now owns AOL, received a slap on the wrist and a $1.35 million fine from the Federal Communications Commission in March 2015 (roughly four months before the AOL acquisition) for using unkillable tracking cookies without proper user consent. And then demand-side platform Turn, now owned by Singtel, later got its own wrist slap from the Federal Trade Commission in December for using Verizon’s supercookies even if a user had opted out.

Privacy isn’t the only stumbling block. Telcos may have access to troves of deterministic subscriber data, but individually they don’t have the scale. The carrier space is fragmented and each market has at least three or four fierce competitors.

But some telcos are starting to partner. In early February, Telefonica-owned O2 struck a deal with AOL UK, which will use Axonix to integrate insights from Weve – the joint mobile ad venture O2 acquired from EE and Vodafone in 2015 – into AOL’s owned and operated media properties and programmatic platform.

“Partnerships must be the way forward for smaller operators – they’re probably better off going with a more federated approach,” said Kamakshi Sivaramakrishnan, CEO of cross-device graph provider Drawbridge, which is looking to help telcos use probabilistic methodology to beef up the scale of their data sets and make them more attractive to advertisers.

But carriers are generally far more accustomed to competing than coordinating, said Tobin Ireland, CEO and co-founder of Smartpipe, a company that helps telcos flow their data into the open digital ad ecosystem and protects privacy with perishable identifiers that expire after a single use.

And while carriers try and figure out their mobile advertising strategies, Google, Facebook and even Apple have become better positioned than telcos to provide reach and scale.

“In 2009, mobile advertising was less than $1 billion worldwide and there wasn’t mobile ad tech or a vibrant data ecosystem,” Ireland said. “But while operators were building their business or waiting, the ecosystem built a $100 billion industry that is increasingly fueled by data and supported by a huge amount of wonderful companies in the open ecosystem.”

Plus, there aren’t enough prominent ad tech platforms even if every telco each wanted to buy its own, said Salman Taj, chief innovation officer at Swedish telecoms company Ericsson.

And yet most telcos are gunning for a way to turn their user data into revenue.

Ericsson, in a vein similar to Smartpipe and other startups like Zeotap and Cinarra Systems, is in the process of launching its own mobile ad platform to help carriers anonymize and monetize their subscriber data without needing to partner with each other or develop their own ad stack.

Despite the richness of their data, telcos simply can’t compete with the likes of Facebook or Google if they don’t have scale.

“Without scale, [telcos] are going to struggle,” Taj told AdExchanger. “There is no way that an AT&T, for example, is ever going to share data with a Verizon. But we think they would work with a neutral player.”