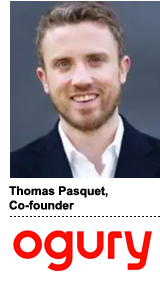 The round, led by existing investor Idinvest Partners, brings the company’s total funding to $92 million over the last six years, and follows a $21 million extension of its Series B in June 2018.

Beyond growing its presence in Europe and APAC – Ogury recently opened offices in Germany, the Netherlands and Singapore and has designs on cracking the Japan market – CEO Thomas Pasquet said he plans to earmark a good chunk of the funds for product development centered on consumer choice.

“The entire industry will thrive if we embrace user choice,” Pasquet said. “That has always been our point of view.”

Ogury was founded in Paris in 2014 as an ad network and mediation solution for app publishers. Its SDK, which has mainly Android penetration, would help publishers monetize with targeted ads and collect user data along the way, including insight into which apps a person has on her phone, in-app event data and browsing habits. Ogury has since transitioned to in-app real-time bidding.

The company claims that its SDK footprint gives it access to more than 400 million opted-in mobile user profiles in 120 countries.

But none of that information is safe to use without getting fully-informed and provable user content, particularly as consumers become more aware of their rights under new data collection and privacy laws, such as GDPR in Europe and the California Consumer Privacy Act (CCPA), which is about to come into force in the United States.

In May of last year, a few days before the GDPR enforcement date, Ogury launched a consent management platform (CMP), which helps app publishers manage consent across all of their different ad network partners.

Pasquet said Ogury is also considering putting some of its new funding toward acquiring a CMP company to help beef up its in-house consent tools.

“We’re playing the long game, because brands will eventually realize that they’re putting themselves at risk if they don’t get consent,” he said. “There were companies that had to close up shop in Europe because of GDPR, but hiding is not a solution, especially with CCPA coming.”

At the same time, consumers need to understand why they’re being asked to opt in to data sharing or collection. Online content, Pasquet said, is free for a reason.

Ogury’s head count stands at 400 people in 18 offices across the United States, Europe and APAC. The company, which claims to be profitable and says it reached $100 million in global revenue last year, is planning on hiring to fill roles across the board for its newest offices in all regions. More than half of Ogury’s total new revenue is US-based.