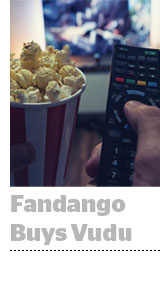 NBCUniversal’s Fandango snapped up Vudu from Walmart for an undisclosed price Tuesday, making it the latest independent streaming service to get gobbled up by a big media player.

“We are moving into the consolidation phase of the streaming business,” said Forrester principal analyst Jim Nail, citing this deal and Fox’s acquisition of Tubi in March. The month before, Comcast (which owns NBCU) bought Xumo, and last year Viacom snapped up Pluto.

“Traditional media companies that have been on the sidelines are now buying their way into the streaming business, knowing they don't have time to build from scratch and be competitive,” Nail added.

Vudu offers both an on-demand movie rental and purchase business – with 150,000 titles – as well as much smaller, free, ad-supported library of 10,000 titles. Unlike other SVOD or AVOD acquisitions, Vudu originally started purely with a pay-for-content model only adding AVOD in 2016. After all, Walmart originally bought Vudu to replace its declining DVD sales business.

“In the short term, these properties will likely retain some degree of independence, but over the mid-term, the media companies will develop a more coherent strategy and likely fold into their core offering,” Nail said. “I won't be surprised to see Vudu become a sub-offering/sub-brand of Peacock.”

With movie ticket sales flatlining due to the coronavirus, it makes more sense than ever to build up FandangoNOW, which allows it to access revenue from home viewing of movies.

“This acquisition is a clear sign of the times,” SpotX CEO and co-founder Mike Shehan said. “At least in the near-term, the days of going to movie theaters to catch the latest blockbuster are over for a portion of the population … By purchasing Vudu, Fandango is diversifying their offering by executing a DTC play for streaming video.”

Plus, Vudu comes with its own user footprint at a time that traditional media companies are trying to spin up new user bases from scratch. Back in October 2018, Vudu shared that it had 25 million users – though stats since then have been hard to come by.

Fandango and Walmart didn’t share a deal price. But Walmart paid $100 million for Vudu back in 2010.