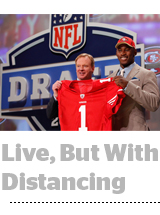 So much chips and salsa is slowly growing stale, beer and soda going flat.

If you think the average American TV viewer misses live sports, consider the desperation for brands that target sports advertising.

The NFL Draft is seeing clearly enough, with a surge of demand from advertisers that are itching for the return of live sporting events.

More than 100 brands are lined up for the three-day NFL Draft production, said Jim Minnich, Disney’s VP of revenue and yield management for sports ad sales (Disney’s ABC and ESPN networks own the broadcast rights). More than 60 of those brands are first-time draft advertisers, he said.

There are even whole new brand categories involved, like home workshop and health and nutrition brands, which he said came on this month.

“Prices are up and very healthy,” with double-digit rate increases, Minnich said. And the program is sold out of all but some of its day-three ad inventory. He said Disney’s ad sales unit sells broadcast commercials, as well as promotions on social media and other channels where there’s active conversation before and during the draft.

The long-time football brand names that are heavily involved in the draft program, like Pizza Hut, Bud Light and Lowe’s, are also more interested this year for football-specific reasons, Minnich said. “A draft with very strong quarterbacks raises the bar as well.”