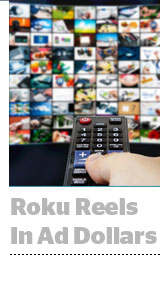 Marketers were slow to move their advertising dollars from desktop to mobile, but they are transitioning to connected TV more quickly, according to Roku CEO Anthony Wood.

Advertisers’ quick adoption of connected TV contributed to its $151 million in Q4 platform revenue.Total revenue totaled $275.7 million. Next year, Roku expects more than $1 billion in revenue, with two-thirds coming from its platform business.

“Viewers are moving to streaming. Advertisers are following, but they haven’t caught up yet. We are starting to see that change,” Wood told investors Thursday during Roku’s Q4 earnings call.

More than 10% of viewing is in over-the-top, but “not even close to 10% of budgets are in OTT,” said Scott Rosenberg, SVP and GM of Roku’s platform business. Unlike its competitors, he said Roku can calculate the additional people advertisers reach beyond their linear audience.

“That kind of ad reach is the elixir and the kind of data the buy side wants to get through that transaction,” Rosenberg said. “Roku is unique in showing them that math.”

Historically, Roku estimates that half of Roku users are cord cutters. After adding 3.33 million subscribers from Q3 to Q4, it holds 27.1 million active accounts. So, if half of those people truly are cord cutters, advertisers could potentially reach more than 13 million people who don’t see linear TV advertising.

Monetized ad inventory last year more than doubled, and Roku expects the same to happen again this year. Roku earned $17.95 per user in Q4, a 30% jump year over year.

As ad revenue grows, Roku’s business is in the midst of a big shift. In Q1 of 2019, platform revenue surpassed player revenue for the first time.

Roku barely marks up its players anymore. Roku made just a 2.9% profit on its hardware and software players in Q4, a decline of 70%. Margins for its player are in the single digits. In contrast, the platform business’ profit rose 72% to $109.4 million, and Roku makes more than 60% margins on the platform side.

Viewership is soaring. Over the past year and a half, people streamed more on Roku than they did in the previous nine years combined.

As Roku scales up its advertising business, it’s increasing monetization faster than streaming hours and new accounts. But Wood emphasized that Roku has plenty of room to grow.

Roku can’t monetize all the content on its platform. If someone subscribes to HBO GO on Roku, it gets a cut of the revenue, but not if the sale happens somewhere else. And some digital channels monetize their content themselves.

Since Roku can completely own the experience on the Roku Channel, it’s investing resources there. Viewers can now watch more than 10,000 movies, 10 times the amount of content it used to have.

“[Roku Channel] is not just a major source of inventory for us, but a highly strategic one,” Rosenberg said. “The power of O&O inventory is that we own that inventory outright. We think it’s a best-in-class experience, in terms of ad loads, frequency and new formats. There is better targeting than third-party channels.”

Investors wanted to know how Roku will compete with Amazon’s player and Viacom-acquired Pluto TV. Wood expects everything to go to streaming – and Roku will get plenty of the growing pie.