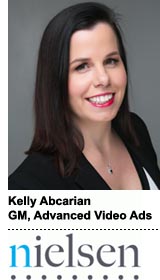 Nielsen’s move into addressable TV planning and measurement starts with the smart TV.

About a week after Nielsen bought Sorenson Media for $11.25 million in a bankruptcy auction, the measurement company has formally launched a new unit: the Nielsen Advanced Video Advertising Group.

That group consists of Gracenote, which was acquired in 2016 for $560 million and has automatic content recognition (ACR) technology that powers dynamic ad insertion in smart TVs. It also includes Qterics, the privacy management solution Nielsen acquired in 2015 that is embedded in 90 million smart TVs.

And as of last week, Nielsen Advanced Video Advertising includes Sorenson Media, which filed for Chapter 11 in October 2018.

Before its downfall, Sorenson was known as a seller of addressable media. It had ACR technology competitive with Gracenote, and it touted its ability to do dynamic ad insertion on behalf of clients like AMC, Hearst or Sinclair Broadcast Group.

But that’s not the aspect of Sorenson that interests Nielsen, said Kelly Abcarian, the recently-appointed GM of the Advanced Video Advertising Group. Abcarian was previously Nielsen’s SVP of product leadership.

“Nielsen Gracenote is a clear market leader when it comes to ACR and ad replacement,” she said, noting that Nielsen has a pilot in place with A+E Networks and CBS.


“Sorenson brings an end-to-end ad tech platform that includes things like collection and categorization of ad inventory, an ad decisioning engine, yield management, data and identity management so you can ensure you’re picking the right audience segments,” Abcarian said. “And they’ve connected into many partners, whether it’s bid management systems or media-buying platforms.”

In other words, besides existing technologies that can enhance Nielsen’s offering, Sorenson also has existing partnerships that Nielsen hopes it can use to deepen its relationships in addressable TV.

One thing to look out for is whether the combination of Sorenson and Gracenote strengthens Nielsen’s position with Samsung, especially since Samsung is particularly finicky about licensing its proprietary data.

Abcarian acknowledged that Gracenote and Sorenson had a number of joint clients, without explicitly naming any of them. “Together, we can bring a strong offering to the marketplace to accelerate the move to addressable, faster than it’s happening today,” she said.

“We’ll start with solving the smart TV glass screen itself,” Abcarian said. “And we’ll look to have the industry guide us around how the tech and data sets and algorithms we create can help solve other challenges across media platforms at large, whether that’s set-top boxes or connected devices.

We’re looking to learn from others to do addressable across those spaces.”

While that’s the vision, there are still a lot of decisions to be made about what exactly the Nielsen Advanced Video Advertising Group will offer and how – such as whether its solutions will be bundled or sold a la carte.

Abcarian noted that the Advanced Video Advertising Group already has a suite of products for audience buying. For instance, Nielsen introduced a forecasting tool last year that looked at syndicated audience segments, which could inform the buying and selling of inventory.