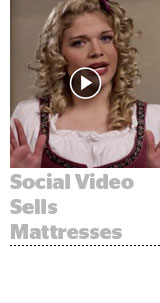 The mattress space went from sleepy to startup hot in just years.

Utah-based Purple is one of those bed-in-a-box startups trying to gain a foothold in a space that’s becoming crowded with new entrants, including Casper, Leesa, Tuft and Needle and Saatva.

Purple is getting the word out with a social video-heavy strategy that focuses on constant testing and creative iterations. A YouTube video where Goldilocks drops raw eggs on a Purple mattress (spoiler alert: the eggs remain intact), for example, has amassed 53 million views.

The company pays particular attention to Facebook and YouTube’s algorithms. If it creates quality ad creative, the cost of distributing ads goes down and performance goes up.

The mattress startup booked $75 million in revenue in 2016, the year it launched. Its run rate is multiples of that figure. But while Purple started via Kickstarter, its venture-backed competitors have raised hundreds of millions in funding, giving them access to vaster marketing budgets.

Purple’s marketing must run leaner than the competition.

Purple does most of its marketing in-house, and the creative and media teams interact with each other frequently. In contrast, many large agencies keep creative and media departments in silos. The company also is not afraid to spend on creative production, because it knows that quality ads drive results and lower media costs.

“We have more people on our creative team than our advertising or acquisition team,” Purple CMO Alex McArthur said. “We cannot get enough good creative.”

To understand how to design more effective ads, the creative team received primers on how digital advertising works. Instead of sending just a finished product, it creates multiple iterations of ads, and have learned which tweaks boost conversions.

“If your creative doesn’t resonate with the audience you’re promoting it to, it will hurt your spend quite a bit,” said Dan Bischoff, senior director of customer acquisition. “Facebook gives you a [relevancy] score. You reach less people with a worse creative, and it affects watch times.”

While Purple aims for top video creative, it doesn’t expect to reach audiences for free, as many marketers did in the early era of viral videos.

“If you are not paying for [distribution of] content, it’s a waste of time,” Bischoff said. “People who think they can put a video on Facebook or Google organically on the platform and see it go viral will fail 99% of the time.”

As Purple strives to reduce media costs and boost results, it has discovered one distribution technique drives strong results. Purple targets ads not to people in its target demographic, but to people who like to share videos.

“We find that audiences that share can make us more money,” McArthur said. “Most companies only target the people that buy. We find the audience that might not buy, but will tell people about it who might buy.”

On YouTube, Purple also tries unconventional strategies that will lower costs and cause YouTube’s algorithms to promote the content. For example, while many brands aim for short videos, Purple created videos lasting about four minutes.

“YouTube rewards companies with a longer watch time,” McArthur said. “If we have an average watch time of two minutes on a four-minute video, that’s four times the average of our competitors. We get rewarded [algorithmically] for that.”

While YouTube offers stronger analytics to marketers, Facebook offers sharing – and lower costs. “YouTube has eyeballs, but Facebook is making it cheaper for advertisers at the moment,” McArthur said. “It’s an opportunity right now,”

As the 18-month-old startup refines its social video strategy, the next step will be creating more sophisticated attribution modeling so it can analyze more than how customers interact with ads or the last touch before a purchase.

The company knows its videos help move customers closer to purchase: If a customer watches a video on Purple’s own site, they are four times as likely to purchase a mattress. But though some customers convert right after watching a video, they are the exception, not the norm.

Understanding how video views affect other channels, like search – where Purple often sees spikes after running video ads – will be the next step as Purple tries to win the mattress wars.

“Our goal is to be the next unicorn in Utah,” McArthur said.