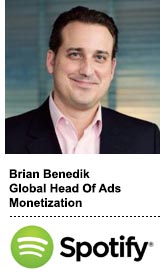 Spotify was an early mover in programmatic audio, and it’s taking that momentum into 2018.

“Marketers are moving so much money to programmatic. We’ve seen that channel explode,” said Brian Benedik, global head of ads monetization at Spotify. “We’ve seen brands [come to Spotify] that have never invested in audio because we’ve made it programmatic-enabled.”

“Everything we’ve built, whether it’s audio, video or display, we’ve made programmatic-enabled,” he said. “That allows us to not focus so much on how [brands] want to buy, but what they want to buy and what their strategy is.”

Now Spotify, which operates in 60 countries globally and has 140 million monthly active users and 70 million paid subscribers, is betting on the growing podcast space as its next audio frontier.

AdExchanger: How important is programmatic to your revenue strategy? Do you envision all sales at Spotify going programmatic?

BRIAN BENEDIK: If this is where the demand side wants to take it, where at some point the transactional part is handled through data-enabled pipes, we see that happening. We see chunks of our business ever year becoming more programmatic-enabled.

How has programmatic audio grown at Spotify in the past year?

More demand-side platforms are jumping into the programmatic audio space. They see it as an opportunity. Their business has been so display- and video-focused. There’s an ecosystem developing around audio. We’re trying to get more premium supply for the audio world because the reception from brands has been huge.

What’s needed for programmatic audio to scale? Are you waiting on Pandora to make its inventory available?

What’s the sentiment around programmatic audio among buyers? Is there demand?

The radio groups are jumping in. They love that there’s a data-enabled, automated set of pipes that can help with transactions. The digital teams aligned with video and display are interested too. There’s a bit of tension developing inside agencies between the digital and radio teams.

How do you navigate that? Does your sales team need a special skill set?

How important is your ad-supported tier versus subscriptions?

There’s quite a bit of religion in the freemium model. There should be a healthy free tier and a healthy subscription tier. Those two work together. Some users will upgrade, some will stay on the free tier. From our standpoint, it doesn’t really matter.

We’ve got a disproportionate amount of users on the free tier, but the majority of revenue is from subscriptions. We think there’s runway for both. It’s not a cookie-cutter approach to each market.

How big of a focus is podcasting for Spotify this year? Will that be a serious or ancillary revenue stream?

How are you monetizing podcasts? Programmatic is still nascent in that space.

We’re selling direct. There’s still a lot to be solved for with ad insertion, ad servers and third-party measurement. Once that gets solved we can figure out if there’s a programmatic solution. We envision being in the middle of that, but there’s still work to do around fundamentals.

You sit on a ton of first-party listener data, but so do your competitors. What makes your data special?

One out of every two streams on Spotify is user-initiated. People are sharing, playing and skipping, and we’re getting a lot of signals from that. That’s shaping a strategy around music, moments and activities.

Our differentiator is also technology. Of the 3,500 Spotify employees around the world, half are engineers and developers. We’re a tech company. I’m not sure that can be said for some of our competitors. We used to be just an audio platform, and that’s still true, but now we’ve become a multimedia platform.

Spotify has been trying to push into original video content for a while. Do brands or users understand that story?

Many folks on the brand side think of us as an audio platform. We’re continuing to educate them that we’re becoming a multimedia platform.

We’ve learned that video resonates with our users when we put in places that’s a destination already. We have millions of people listening to [the playlist] Rap Caviar every day. As opposed to taking them elsewhere, let’s include video in that experience. That’s the pivot you’re seeing us make.

Video ads have become our fastest-growing revenue source. With all of the noise about brand safety this year around other video platforms, Spotify has been a recipient for that investment.