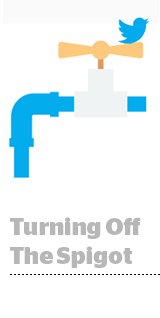 Advertisers will still be able to use third-party data, they’ll just have to buy it themselves and Twitter reserves the right to approve the data sources. Twitter told The Wall Street Journal on Wednesday that its new policy will take effect early next year.

According to Twitter, cutting off third-party data access for ad targeting on its platform is unrelated to its admission just the day before that it may have shared data with ad partners without user consent. (OK.)

When Facebook removed its third-party data broker integrations last year, ad buyers and data sellers were left in the lurch, at least in the short term. In August 2018, four months after Facebook pulled the plug, Acxiom acknowledged a multimillion-dollar revenue hit thanks to the end of Partner Categories.

But Twitter’s change doesn’t seem like it’s going to have the same impact. The early industry consensus is that it’s a smart move from a privacy perspective, but that the effect on advertisers is minor.

AdExchanger spoke with industry execs to take the temperature on what Twitter’s move means in a larger context.

To what extent is it a liability – or an asset – for social media companies to offer third-party segments for targeting on their platforms?

I prefer to leverage our data and our direct partners’ data (in this case, Twitter) virtually all the time. The added privacy benefits certainly outweigh any nominal value from the third-party data in this case.

What we’re seeing is not so much a repudiation of third-party data, but more so a vote of no confidence in the industry’s current infrastructure for collecting and sharing it in a post-GDPR world. Advertising user data is still an incredibly valuable signal, but until a player is able to cement itself as true signal – fairly and legitimately collected – it’s not worth the risk for any scaled platform to get caught in the crossfire during the transition.

Twitter’s update seemed like an inevitability to us – following suit with other self-serve primary buying platforms like Facebook and Google with tighter controls for consumer data privacy around CCPA/GDPR. Better opt-in controls and transparency for consumers on platforms like Twitter will ensure ongoing user growth and media investment that follows engaged platform users.

We do still see a significant need for access to third-party party audiences for our advertisers, with clear evidence of better performance and effectiveness while leveraging them on key digital platforms like Twitter. The challenge for us has simply been the nascent state of this new audience marketplace and efficiently deploying these audiences across platforms like Twitter – where separate legal agreements and payment/fulfillment process have to be created for the protection of our advertisers.

Our hope is Twitter learns from challenges created by other platforms with this type of targeting shift, ensuring that third-party audience usage continues to be seamless as these changes are made.

I don’t believe it’s the asset it once was. It would have been a much bigger change for the industry if this had happened a few years ago or if Twitter did it first, but Facebook did it first and advertisers were more reliant on Facebook’s data program anyway. Facebook made it very easy to use third-party data with just one click, and Twitter never made it that easy. Facebook is so relevant that it was a big shock to the industry, but Twitter doing this it’s like, “OK, we’ll just figure it out.”

At the same time, since Facebook made its change, LiveRamp and advertisers haven’t been sitting still. Data buyers in particular have not only figured out alternate paths, but ones that are more diverse and a better fit for specific campaign strategies. Basically, the “bring your own data” movement has led to smarter more evolved data buyers.

Third-party data is not really a liability. These providers will continue to aggregate and sell data regardless. By removing the asset from ad platforms you actually only hurt smaller businesses and advertisers as big brands and agencies can still access third-party data for audience enrichment and targeting.