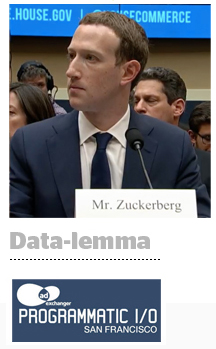 The takeaway in SF: Facebook will continue to make policy changes to the way data is handled on its platform – and that will likely drive up ad rates.

Regardless, minimizing data flow in and out of Facebook will be the key focus this year to limit issues with user privacy, Rabkin said: "The ads world and the data world are crashing into the real world right now."

In recent weeks, Facebook tightened access to its APIs, removed third-party partner targeting and clarified to consumers how their data is used.

“Relevance has been one of our biggest factors, and data is a key to relevance,” Rabkin said. “That said, the supply chain for data targeting has gotten really murky. We really want to clean it up and make it better.”


To do that, Facebook is building certification tools for advertisers to disclose where data used in Custom Audience lists came from. Facebook will require ads to display an opt-out link so consumers can have the option of blocking their messaging.

These changes will affect ad prices. But even if there are price increases, Facebook is convined the efficiency of its auction and advertisers’ ability to measure performance will even out the situation.

“A huge amount of our company growth is through better ads, not more ads,” Rabkin said. “We have to make ads better rather than putting more in front of people.”

At his second grilling, Zuckerberg said “tens of thousands” of apps had access to large quantities of consumer information, and that Facebook would look at patterns of API access to discern what those developers were doing.

If Facebook spots anything suspicious, it will bring in third-party auditors to go through the developer’s own systems and ensure the data is deleted. Then Facebook will notify everyone affected. Zuckerberg added the entire cleanup process would take “many months.”

He also indicated that trust in the developer community was shattered: “Before, we thought when developers told us they weren’t going to sell data that it was a good representation. But the lesson here is that we don’t just take developers’ word for it.”

During his testimony, Zuckerberg fended off more suggestions that Facebook should be regulated. While Zuckerberg reasserted that there should be no regulation, he said Facebook would welcome some – “if it’s the right regulation.”

Some members of Congress, such as Sen. Tom Greene (R-Iowa), seemed to want to piggyback off the EU’s General Data Protection Regulation (GDPR), which goes into effect May 25.

Greene noted that GDPR lets users opt out of having their data used for advertising – and asked Zuckerberg whether that’s a control Facebook would replicate.

Zuckerberg’s response: “I’m not sure how we’ll implement that yet.”

But he indicated that Facebook would bring the data controls required by GDPR to users worldwide.

GDPR’s teeth, however, comes from its power to penalize an offending company 4% of its annual global revenue for an infraction. Even if Facebook agrees to adhere to all the GDPR principles worldwide, it will not face the same consequences in the US as it would in the EU.