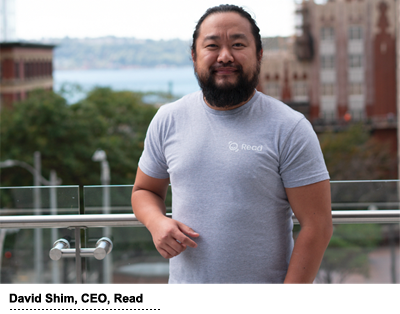 What does ad tech have in common with analytics for virtual meetings?

More than you might think, according to former Foursquare CEO and Placed Founder David Shim, whose new venture, Read, launched on Wednesday with $10 million in seed funding.

“A lot of ad tech founders move on to other categories, [and] when they do it’s usually to big markets where there’s a lot of unstructured data available that people aren’t doing anything with yet,” said Shim, who’s been working on Read and advising early-stage entrepreneurs since leaving Foursquare in December of last year.

Shim first joined Foursquare as CEO after the company bought Placed, his location-based measurement startup, from Snap in 2019.

Read’s first product is a dashboard that uses artificial intelligence, computer vision and natural language processing to measure audience engagement, sentiment and gauge whether a virtual meeting is going well or not.

Engagement is measured by monitoring whether the participants in a meeting are paying attention. If someone is looking down during a meeting – checking their phone perhaps – that’s probably a sign they’re not listening, as opposed to if they’re making eye contact and nodding their head during a presentation or conversation.

Read measures sentiment by evaluating the emotional state of attendees through what they’re saying and the tone they use.

And meeting performance is measured by analyzing a combination of engagement and sentiment mixed in with other nuances. Talk time is a good example. If one person is dominating the conversation and both sentiment and engagement are low, it might be time to give someone else in the meeting a chance to speak. 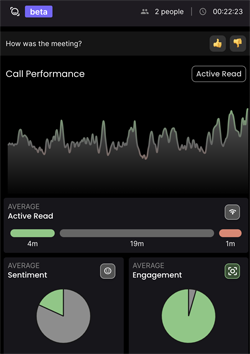 (All of the participants in a meeting have access to the same Read metrics, and if any one person decides to opt out, Read leaves the meeting and deletes all of the data.)

If presenters are able to harness these metrics, Shim said, they can host more productive meetings or get a more immediate sense of whether their virtual product pitch is hitting the mark.

The idea for the Read dashboard came to Shim while he was sitting in one of those meetings that make you wonder to yourself, “Why am I even here?” No one was participating. Some people were checking their phones, and one guy was looking at the ESPN website.

“How did I know that? Because I was also on the ESPN site and I could see the reflection in his glasses,” Shim said.

The presenter didn’t pick up on any of these cues.

“That was interesting to me,” Shim said. “I thought, what can you pick up from the audio and video during a virtual meeting to see how it’s going.”

Since the pandemic began, around 500 million people now spend multiple hours in virtual meetings on a daily basis and, unfortunately, a lot of them … suck.

In addition to Read, Shim has been advising other companies, in some cases as a consultant and in others as an angel investor, including ecommerce advertising startup MikMak and Neyborly, a startup that created a programmatic platform for commercial real estate rentals.

“When I invest in ad tech, it has to be something different,” Shim said. “I don’t just want to invest in another location company.”

Read’s $10 million seed round was led by Madrona Venture Group with participation from PSL Ventures and angel investors, including Imran Khan, the CEO of Verishop and former chief strategy officer at Snapchat; Peter Sellis, Snapchat’s current VP of product; and Shane Atchison, the North American CEO of Wunderman Thompson.

The Read app is free at launch and available on Zoom through an integration with Google Calendar. Eventually, Read will put tier pricing in place based on meeting length and also charge for more enhanced analytics.