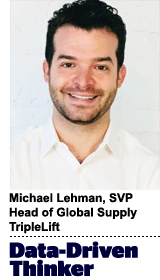 Prior to the first report of the coronavirus in late December, many had speculated for the better part of two years when the next economic downturn would arrive. Whether the virus sparks a complete downturn or temporary correction is unclear, but due to the inextricable link between consumer spending and advertising, the media community’s shared anxiety is growing daily.

However, there’s reason for the programmatic advertising sector to anticipate stability. Programmatically transactable digital media – and the companies that power it ­– has a few defining characteristics that suggest it would fare better in challenging times. Advertisers should take note.

Ultimately, during times of instability, we can expect a flight to accountability, agility and continuity.

While programmatic occupies a larger section of the marketing funnel, it is still primarily a highly targeted, mid- to lower-funnel protocol frequently used for direct response campaigns that align with last-touch attribution. This manner relies less on the speculative nature of branding and more on the data-driven, outcome-based formula that feeds programmatic algorithms industrywide.

When results can be so cleanly tied to spend, that spend should continue to be justifiable, even in a downturn.

And as brands look for cost-savings, one of the first places they look is their agencies. One more forward-thinking move is for brands to invest in and take more control of their programmatic strategy and budgets to save costs and invest in a more efficient form of media. This could have ripple effects downstream that also benefit the programmatic entities that power those transactions.

While targetable and efficient, programmatic is also highly flexible. In contrast with out of home, event sponsorships and TV, programmatic buyers can turn campaigns on, off and optimize accordingly in real time depending on performance. As a result, advertisers have the option and flexibility to test, with low commitments, while optimizing performance for ROI. This strategy is far more comforting to marketers when budgets must be more tightly controlled.

Also, should both the industry and digital publishers experience a pullback in digital branding and sponsorship campaigns, more and better quality inventory will make its way to programmatic buyers via ad tech providers that power them.

The caveat is mediums such as branded content, which is hand-sold and often reliant on more elastic industries such as travel and tourism, and other more custom executions may be the first to feel the pullback on ad spend should it come.

Then there’s the wildcard. It’s impossible to predict the social and behavioral results beyond the inevitable hit to consumer spending, but in a severe permutation social contact becomes more limited, people become more secluded, and face-to-face business is reduced.

In this scenario, we might expect digital media consumption to be even greater, which means more inventory and spending through digital channels. And media technology businesses that require face-to-face direct sales will likely suffer a greater blow to their operating rhythms and business models than programmatic businesses that rely on technology and data to power their transactions.

The coming weeks and months will determine the severity of the correction. When the last downturn occurred in 2006, programmatic ad tech was still in its infancy, so we do not have a true historical comparison for how it behaves during a recession.

However, we did learn that while ad spending will inevitably decrease, marketers acknowledged and numerous studies have shown the benefits of continuing to advertise to help buoy brand recognition and strength in the medium and long term. More traditional mediums such as radio, audio and print have also experienced more drastic cuts then either TV or online.

Advertising continues to be an essential practice, even in a weakened economy, and digital is likely the most resilient outlet for media in a softening market. Programmatic, with its measurability, targetability and flexibility, will be well positioned to continue supporting those digital transactions.

Ultimately, savvy publishers, buyers and ad tech companies are building the right strategies to prepare for an impending and prolonged correction, and it will be fascinating to watch as the programmatic corner of the market responds.