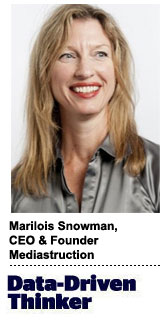 Today’s column is written by Marilois Snowman, CEO and founder of Mediastruction.

Let’s be honest: The advertising industry is taking a few hits these days. Elon Musk buying Twitter raised a bit of a ruckus. Consumers have a love-hate relationship with Facebook.

Legislators are looking hard at treating ad platforms like utilities. Nefarious state actors have hacked our political discourse and even our understanding of facts.

But this isn’t the first time the ad industry is facing choppy waters. If the Mad Men era taught us anything, it’s that the ad world is in desperate need of a new position: the Chief Morality Officer.

There is big business in hijacking the lucrative world of impression sales. As consumers, we depend on the internet for everything. We work, shop, learn, communicate, convene and entertain – all online.

This is an area where a Chief Morality Officer could lead decision-making, serving as an agnostic figure, not bound by the buy or sell side.

Currently, human resources teams drive DEI initiatives. But DEI is important in many more areas than hiring. For example, AI-enabled digital buying platforms don’t have inclusive algorithms. In fact, depending on their parameters, they specifically exclude marginalized communities. This is a huge issue for certain heavily regulated industries, like finance.

There’s an opportunity for more awareness and adoption – the Chief Morality Officer would be a great influencer in this space.

Back in 2016, an investigative firm hired by the ANA released a bombshell report calling out “creative accounting.” The report found that agencies received back-end concessions from publishers, including cash, free media, debt forgiveness and equity.

These challenging compensation demands often come from procurement officers without agency experience, in a scenario that’s good for the brand’s balance sheet but bad for the agency-brand relationship.

So where does that leave agencies? They’re forced to get “creative” with their compensation models. Like Switzerland, the Chief Morality Officer could serve as a neutral party, acting as a facilitator between agencies and procurement.

API vendors, Python libraries, cloud computing and data storage and machine learning are making sophisticated and customized analysis available. But garbage in is garbage out.

While there is an increasing number of modeling and analytics options, there is an equal number of black boxes. Opaque methodologies for attributing media’s return on investment means brands won’t know if the product works until it doesn’t, wasting brands’ time and money.

And when it comes to self-serve solutions, a massive talent gap exists, preventing brands from unlocking data. But the Chief Morality Officer doesn’t need to be a data scientist – the individual simply needs to know how to ask the right questions on a quest for truth.

Overall, the Chief Morality Officer would cross divisions and serve as an important connector on both the agency and brand side. Already, ad tech tools like Check My Ads are calling out the monetization of unscrupulous, offensive and dangerous publishers. What if we took that effort one step further and created a mission statement, a set of rules and an industry consortium for the new role of Chief Morality Officer?

It would be great to be seen as an industry of not only creativity but also courage and conscience.