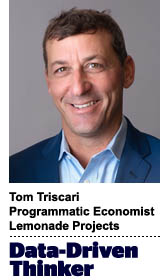 To: ACME Media Team and AOR

Re: Our continued reliance on cookies is less than advantageous

I have done my homework on identity recognition in the bid stream. Have you done yours? Our continued reliance on cookies has put ACME at a total disadvantage. We must take urgent action.

Over the next 12 months, I expect to get a weekly report consisting of just three charts:

We should all expect these unambiguous barometers to go up and to the right every day, week, month and quarter. These three objectives are the only agenda items for our weekly all-hands media meeting over the next 12 months.

Let’s start with a few facts

Key questions based on these facts

My biggest programmatic pet peeve is believing things that are not true. We must ask ourselves, “What do we really want from programmatic ads? What is true about them?”

Then we should ignore all the noise and practice what is true to get the thing we want. Considering our big bet on CTV and other programmatic formats, we certainly need to up our game.

For example, we have heard many times that transacting on first-party IDs will not scale as much as cookies do. Let’s examine that claim.

If we start with an audience segment of 100 cookie IDs, only around 25 or so will get “matched” in the bid stream after all the syncing hops across data sellers, DSPs and SSPs.

Now let’s contrast this benchmark with a first-party data approach. Many of our key publisher partners are already authenticating first-party users. According to LiveRamp and others, it is more than reasonable to forecast that at least 25% of the open web will be authenticated within a year.

So, do cookies really provide scale or is an unverified myth disadvantaging us?

The second pet peeve that really gets my underwear in a bunch is the tired conversation around frequency counting and control. I’m sure everyone recalls the fantastical DMP sales pitches and how nirvana filled the room when they sold us on the wonders of frequency capping across all the various cookie IDs tied to a single user. Was that true? No, not by a long shot.

If first party data does provide a real future-forward alternative to cookies, then we need to know sooner rather than later. So far, the claim appears to be true but will remain inconclusive until we run many more campaign experiments containing nothing but first-party data IDs.

Playing off Diagram #1 above, we can clearly articulate what we expect from frequency counting and control as we continue to test and transact on first-party data.

For instance, Diagram #2 below tells us that we can count where each user ID stands at any point in time, during every campaign, and that our hands-on-keyboard agency team can optimize accordingly. Doing so means serving more effective ads and saving millions in the process.

First-party data is more than a compelling alternative to test and learn fast, so let’s work faster to find out if Diagram #2 is true.

Programmatic mice keep me up at night

Most marketers have “programmatic mice” in their houses. We have ignored them for far too long. A big player such as Google has tons of audience data and also happens to believe they have the best programmatic mousetrap. If they woo us marketers into total complacency with their two-year cookie deadline, and then pull the plug early, we’ll have no choice but to rush into Google like lemmings. Google will be the only ones with a viable mousetrap to run display ads on the open web. Is that a position we want to be stuck in?

The sooner we accomplish the objectives outlined herein, the sooner we’ll have our own mousetrap and control our programmatic destiny. We have a massive opportunity today. It’s not going to be easy. We have a plan to get there. Let’s make it happen! Up and to the right!