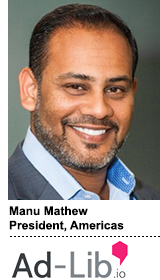 Ad-Lib.io, a company founded by a group of former Google execs in 2017 and which offers creative workflow tools, has clinched an additional $6 million in Series A financing.

The latest round brings its total funding to $12 million in less than two years and will be used to accelerate the growth of the London-based company’s global expansion – primarily in the United States – as well as enhancing its intelligent automation platform to include video and social capabilities.

“The reason why we went for the funding right now is to expand the US market,” CEO Adit Abhyankar told AdExchanger. Additionally, Abhyankar intends to use the funds to further build out its technology.

The company, which has about 120 employees worldwide, recently tapped Manu Mathew – the founder of multi-touch attribution company Visual IQ that was acquired by Nielsen in 2017 – as its president of the Americas to lead its US operations.

The bulk of the funding will be used to increase the company’s headcount by about 20% to 30% this year, mostly in the US to expand its sales and client services teams. The company has offices in Boston and San Francisco.

“We have a lot of the top leadership in place but we’re building out the sales capabilities and client service capabilities,” Abhyankar said. “We’re seeing a lot of demand worldwide. There’s actually hiring going on all over the place.”

Ad-Lib was founded by CEO Oli Marlow-Thomas, a former creative lead at Google’s DoubleClick, and expanded to the United States in 2019. Ad-Lib provides a SaaS based marketing technology platform that connects creative and media workflows using AI that makes it easy to produce and optimize relevant ad creative across all digital channels.

The company currently works with 10 of the top 30 global advertisers – including Nestle and Deliveroo – and grew by 280% last year, with more than 1,350 campaigns executed on the Ad.Lib.io platform. The company made key hires around the world and expanded into Hong Kong and Boston in 2020. It also updated its creative management platform last year that included deep integrations with Facebook, Google Ads, YouTube, and DV360, as well as privacy safeguards that allow for personalization without requiring any cookies or fingerprinting.

“As cookies start to go away, people will realize that it’s not so much about figuring out how to find [a consumer] at all costs,” he said. “People will really start paying attention to their creative. I think people will start to recognize the value of creative a lot more as a powerful, mostly untapped lever that you can use to capture people’s attention.”

Abhyankar declined to talk about the company’s profits, but said that 2020 was a pivotal year for Ad-Lib despite the pandemic. The company works with auto, CPG and internet services clients, among others, and recent client wins played a big role in its latest round of funding.

“It’s the customers that led to the funding,” he said. “If you look at our investors, what they were impressed by is, we were winning these huge brands during COVID. There’s a real need for what we are doing and that’s what got the investors excited about funding us so we could win even more customers. We will be investing in marketing so that we make our presence known even more in the US.”

“The thing that makes us powerful is we’re not just doing this for display, or social, or YouTube – we’re basically doing this cross channel, for whatever channel a customer might be working on,” he said. “Our strong belief is you actually need to be doing all of these different things in a single platform.”