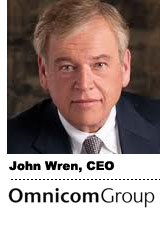 Omnicom mitigated the impacts of the COVID-19 pandemic on its business in part by cutting 6,100 jobs across its network in the second quarter, the company said Tuesday during its earnings call.

Overall, cost-cutting measures are expected to save Omnicom $500 million in 2020.

“The quarter posed extraordinary challenges,” CEO John Wren said on the earnings call. “The effect of COVID and related lockdowns were unprecedented.”

Omnicom’s advertising business declined 26.6% in the quarter, driven in part by revenue decreases associated with its programmatic business, where it offers principle-based buying options for clients. Third-party service costs, which Omnicom generates in its events business as well, were $400 million in the quarter.

“If a client is focused on achieving a particular ROI or metric … they choose a bundled product,” said Chief Financial Officer Phil Angelastro. “We deliver that bundled media for a fixed price, and the risk of delivering at that price, for better or worse, we bear.”

Revenues also declined in all of Omnicom’s disciplines besides healthcare, which grew 3.2% organically in the quarter. CRM execution and support, which contains Omnicom’s events and field marketing businesses, declined 27.6% in the quarter. CRM consumer experience declined 25.6%, and PR declined 14%, offset partly by demand for crisis communications.

Declines stemmed from reduced demand for Omnicom’s services as clients in travel, retail, auto and other affected verticals paused or cut spend. Sectors such as technology and telecom fared better in the quarter.

Q2 was ugly, but Omnicom expects things to start turning around in the second half of the year.

“We think the worst is behind us, with Q2 being the worst point for year-over-year revenue declines,” Wren said.

But recovery won’t be immediate – and its extent will vary regionally and by vertical.

“Will governments open up to the point where large gatherings will be back?” Angelastro said. “We just don’t know, and we’re not anticipating in the second half that there’s going to be a meaningful rebound.”

Omnicom snagged a few new clients in Q2, including becoming the Air France’s global agency of record account and Clorox’s media business in the United States.

Because of economic volatility, Omnicom’s agencies have established contingency plans that allow them to flex staffing and budget up or down based on client spend, with additional cost-cutting measures possible in the second half.

“We will continue to actively manage our costs to ensure they align with our revenues,” Angelastro said. “We want and expect our people to be realistic about their forecasts.”