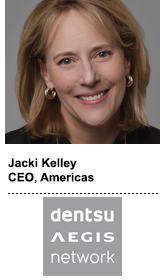 Nick Brien, CEO of Dentsu Aegis Network in the Americas, will leave at the end of the year after 2 1/2 years on the job, the company said Friday.

He will be replaced by Jacki Kelley, who joined Dentsu in March as president, chief client officer and CEO of creative in the United States. Kelley will report to Dentsu Aegis Network global CEO Tim Andree. Brien will stay on through Q1 2020 to help with the transition.

A spokesperson said Brien decided to leave the company voluntarily.

“Nick has attracted key talent to Dentsu Aegis, including Jacki, led many impressive winning pitches and as importantly, reignited the M&A momentum across the region,” Andree said in a statement. “He has successfully steered the Americas business back to growth.”

Brien’s successor Kelley is no stranger to running an agency group. She joined Dentsu earlier this year from Bloomberg, where she was chief operating officer, but previously she was the global CEO of UM and the CEO of North America and president of global clients at IPG Mediabrands.

“Jacki has been a recognized and admired leader in this industry for over 25 years,” Brien said in a statement. “She is absolutely the right person to lead Dentsu into 2020 and beyond.”

But she has her work cut out for her, as holding companies struggle to post growth in a changing industry. Dentsu Aegis Network grew -1% organically in Q3 2019, but the decline was mostly due to headwinds in markets outside the United States. Organic growth in the Americas region was 2.7% in Q3.

“Dentsu has the best capability in all the areas that matter most to clients and a commitment to integrate them with ease,” Kelley said in a statement. “It’s an exciting time to be in this industry and I am confident 2020 will be another pivotal year for growth. I’m honored to take the torch forward.”

Brien, who was previously CEO of Hearst-owned agency iCrossing, joined Dentsu Aegis Network in 2017, after its pivotal $1.5 billion acquisition of Merkle. He oversaw the roll out of its people-based data platform, M1, to media agencies across the group. That acquisition sparked an avalanche of similar data-led purchases by competitors IPG and Publicis Groupe in the following years.

Under Brien, Dentsu won major clients such as Procter & Gamble, AB InBev and Intel’s global media business. The group also underwent structural changes to increase collaboration and simplify its offerings – a challenge many of Dentsu’s competitors are also navigating.